Confidence at a high with Irish consumers upbeat on jobs 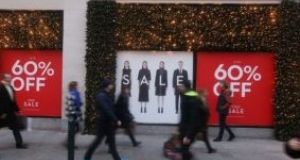 Consumer confidence in Ireland has hit its highest level since the recession, according to a new survey that shows households are among the most upbeat in Europe.

The report from Nielsen shows Ireland is only outshone by Denmark, Turkey and Germany in terms of consumer sentiment, with the organisation’s index rising to 102 points in the second quarter, its highest level since the final three months of 2007.

Irish confidence levels surpassed that of the UK for the first time in nearly nine years during the April to June period; it is also markedly higher than Europe as a whole, which stands at 85 points.

The latest survey shows 58 per cent of Irish consumers feel positive about their personal finances with the same percentage feeling upbeat over employment opportunities.

Some 44 per cent of Irish consumers said they feel now is a good time to make purchases, the second highest level recorded since the recession.

“Increasing consumer confidence has been a continuing trend in Ireland over the last few years due to a steady improvement in the Irish economic situation,” said Matt Clark, Nielsen’s commercial director in Ireland.

“This increase in confidence has translated to consumers spending more on groceries, driving both volume and value growth in the sector, which is good news for Irish manufacturers and retailers,” he added.

Nielsen’s statistics come from surveying more than 30,000 consumers across 63 countries.