Planet Business: All aboard the pilotless aircraft of global financial news 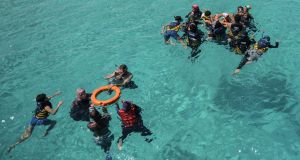 Sum that airlines could save on pilot costs by introducing pilotless aircraft, according to a study by Swiss bank UBS. The figure does not include the loss of business as passengers run away from the airport screaming in terror.

Percentage of the 8,000 people surveyed by UBS who said they would be unlikely to take a pilotless flight. The other 46 per cent have apparently never seen a horror movie in their lives.

Percentage of air accidents estimated to be the result of human error. Still, though.

Image of the week: Snorkel economy

If you’re stuck in the office in August, it’s hard to look upon this picture of tourists snorkelling in clear blue water as anything other than a jealousy-inducing idyll. But these snorkellers are in the Egyptian Red Sea resort of Sharm el-Sheikh, where tourist numbers have plummeted following the crash of a Metrojet flight in October 2015, thought to have been the result of an on-board bomb. The incident led to the cancellation of direct flights from the UK and tour operators such as Thomas Cook abandoning the once popular resort. Now Saudi Arabian billionaire Prince Alwaleed bin Talal has said he will invest more than $800 million in hotels in Egypt in a bid to lift tourism-dependent places such as Sharm el-Sheikh

A “bronifesto” is any sexist treatise written by a “techbro”, aka a man who works in the tech industry who feels it is simply his rightful free speech to slag off women, including his co-workers, often invoking junk science and/or “banter”. One such recent effort, both condemned and celebrated, was written by James Damore, a now former Google engineer, who was fired after he wrote a “manifesto” succinctly described by the great tech journalist Kara Swisher as “sexist twaddle”. Implying Google has got its diversity efforts all wrong, he waffles on about how women are biologically less suited to leadership or working in tech and are prone to “neuroticism”, thereby making it incredibly difficult, if not impossible, for any woman to work with him. Goodbye.

Getting to know: Anders Kristiansen

Kudos to Anders Kristiansen, the Danish chief executive of high-street fashion chain New Look, who has declared its “product could be better”. Kristiansen, whose stylish pockets were swelled by a £2.2 million bonus following New Look’s sale to South Africa-based Brait in 2015, made the admission that New Look’s clothes, well, Could Be Better Look after a “disappointing quarter of trading” in which customers evidently voted with their wallets. Kristiansen, who spent much of his career in the office supplies business, has already reshuffled the design team, recruiting the former head of the Zara Basic line at the Inditex company as New Look’s chief creative officer. “It’s all about delivering the product that the customer wants, to make it more fashion forward, attractive and wearable,” says Kristiansen. When he puts it like that, it sounds easy.

August 9th was the 10th anniversary of the credit crunch that is often regarded as the “beginning” of the global financial crisis – or the moment when the financial sector started facing up to toxic debt problems it had spent years making. The following are extracts from The Irish Times stock market reports at the time.

1. August 6th: “The bank holiday meant it was another day of light trading on the Dublin market. The market opened weakly as it took on board the sharp pull-back on Wall Street on Friday.”

2. August 7th: “Financial stocks led the market in a reversal of Monday’s patterns, pushing the Iseq index of Irish shares up 1.8 per cent. Dealers said that this only went to show the volatility in the market at the moment.”

3. August 8th: “(After a 3.3 per cent jump) the Iseq index is now trading where it was more than two weeks ago following a rollercoaster ride in line with global markets.”

4. August 9th: “Shares in Dublin plunged in line with other European markets. Investors were spooked by subprime credit problems in the US.”

5. August 10th: “As much as €4.5 billion was wiped off the value of the Irish market yesterday as the Iseq index failed to escape the onslaught of negative sentiment that continued to sweep the globe.”