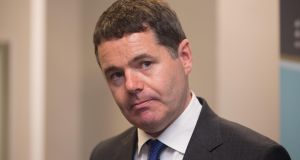 Paschal Donohoe: the Minister said the tax rules from which Apple benefited had been available to all and were not tailored for the US technology giant. Photograph: Gareth Chaney Collins

The Minister of Finance, Paschal Donohoe, has said the European Commission’s demand that Dublin collect up to €13 billion in back taxes from Apple was unjustified, in an interview with Germany’s Frankfurter Allgemeine (FAZ) newspaper.

The European Commission ordered Apple to repay taxes to the State after ruling last year that the US technology company paid so little tax on its Ireland-based operations that it amounted to state aid. The Government has been vehement in its opposition to the ruling.

In the interview, extracts from which the FAZ published on Wednesday, Mr Donohoe said the tax rules from which Apple benefited had been available to all and were not tailored for the US technology giant. They did not violate European or Irish law, he added.

The Government has said it will collect the money pending an appeal of the ruling by Apple, but Mr Donohoe said it was not Dublin’s job and the request was not justified.

“We are not the global tax collector for everybody else,” FAZ quoted him as saying.

The money is being deposited in escrow, with Bloomberg reporting earlier this month that the Government and Apple were close to a deal to protect the State from any losses that could occur while it holds the company’s money during the tax fight. If the appeal, which could take as long as five years, is successful, the money will be returned to Apple and the Government wants to make sure it isn’t liable for any drop in the value of the fund while the case winds its way through the EU courts.

Also in the FAZ interview, Mr Donohoe also distanced himself from French and German proposals that the EU do more to prevent Chinese investors from buying strategically important European companies, saying this would endanger Europe’s reputation for openness.

“We must be very careful not to endanger our reputation as advocates for free trade,” he said.

He also appeared lukewarm on proposals by French President Emmanuel Macron for a euro zone budget and finance minister, saying the bloc’s focus for the next two years should be further developing its banking union.