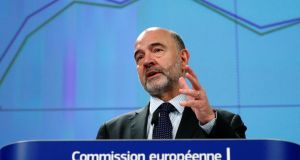 The European Commission has cut its growth forecasts for Ireland amid the current Brexit uncertainty.

In its latest set of winter forecasts, Brussels forecast the Irish economy would grow by 4.1 per cent this year in gross domestic product (GDP) terms, down from 4.5 per cent previously. This is lower than the Government’s forecast of 4.2 per cent.

The Commission also predicted growth would moderate further to 3.7 per cent in 2020.

The revised projections come amid growing uncertainty about the UK’s future trading relationship with the EU and global trade tensions between the US and China.

“The economic outlook remains clouded by uncertainty. This relates primarily to the terms of the UK’s withdrawal from the EU,” the Commission said in its segment on Ireland.

“ As a highly open economy, Ireland is also particularly exposed to changes in the international taxation and trade environment,” it said.

“ The huge impact of the often unpredictable activities of multinationals, could drive headline growth either up or down,” it added.

However, it said the ongoing Brexit uncertainty could dent consumer confidence, posing a downside risks to consumer spending.

For the euro zone as a whole, the Commission also cut its growth forecasts this year and next because it expects the bloc’s largest countries to be held back by global trade tensions and an array of domestic challenges.

The new estimates are far less optimistic than those released in November, when Brussels expected the euro zone to grow 1.9 per cent this year and 1.7 per cent in 2020.

Britain’s growth is expected to slow to 1.3 per cent this year - a touch higher than its previous forecast - up from 1.4 per cent in 2018. However, it underlined that forecasts on Britain are based on the “technical assumption” that EU-UK trade will not be affected by Brexit.

“The slowdown is set to be more pronounced than expected last autumn, especially in the euro area, due to global trade uncertainties and domestic factors in our largest economies,” Commissioner for Economic and Financial Affairs, Taxation and Customs, Pierre Moscovici, said.

“Europe’s economic fundamentals remain solid and we continue to see good news particularly on the jobs front. Growth should rebound gradually in the second half of this year and in 2020,” he added.

Brussels also revised down its estimates for the inflation in the 19-country currency bloc next year, which now is expected to be lower than forecast by the European Central Bank - likely complicating the bank’s plans for an interest rate hike this year. - Additional reporting Reuters