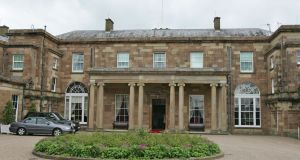 Among the new facilities that have been developed on the Hillsborough Castle site are a new cafe and tearoom which will open to the public from April 10th. File photograph: Frank Miller

A family-owned catering company has won a £6 million (€6.8 million) contract to provide catering services at Hillsborough Castle in Co Down as part of efforts to turn it into a major tourist attraction.

Yellow Door, which is owned by Simon Dougan and his business partner, Barry Smith, who previously held a Michelin star, has been awarded the catering contract by Historic Royal Palaces, the UK charity that manages six palaces.

Gina George, retail director at Historic Royal Palaces, said the charity has invested £20 million in transforming the 100-acre Hillsborough Castle and Gardens estate, which is the Queen’s official royal residence in Northern Ireland.

The UK charity, which also looks after the Tower of London, Hampton Court Palace, the Banqueting House, Kensington Palace and Kew Palace, is hoping that Hillsborough Castle will also become a major tourist attraction, potentially welcoming about 200,000 paying visitors a year.

Among the new facilities that have been developed on the Hillsborough site are a new cafe and tearoom which will open to the public from April 10th, 2019.

It will be the first time in the castle’s 250-year history that members of the public will be able to enjoy afternoon tea and more in royal surroundings.

Yellow Door plans to create an additional 35 jobs as a result of the Hillsborough Castle contract which is the latest high profile win for the company.

The business which initially started out as a fine-dining restaurant in Gilford in 1992 operates a chain of delis in the North and also provides catering services to the Ulster Museum and Ulster Rugby.