Climate apocalypses, ‘clerical errors’ and an update on the streaming wars

Planet Business: A tale of confidence and overconfidence 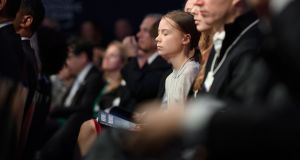 Image of the week: Listening to Trump

Three years into Donald Trump’s shark-jumping presidency in the United States and one thing seems clear: for him, Swedish climate activist Greta Thunberg is a nemesis. She stands for everything he tramples all over, she has a devoted following large enough to annoy him and she shows up at the most elite of events.

After giving him the world’s best scowl at the United Nations in New York in September, Thunberg kept a safe distance from Trump – and he from her – at the World Economic Forum’s annual meeting in Davos, though she was forced to endure his rant of a speech. “Our house is still on fire,” Thunberg later said at a panel discussion on “averting a climate apocalypse”, the one thing Trump is totally confident won’t happen. Or, as Nobel Prize-winning economist Joseph Stiglitz put it, “we’re going to roast”.

In numbers: Pluses and minuses

2 Percentage by which Dixons Carphone, the owner of Currys PC World, initially said sales had risen over the Christmas period.

2 Percentage by which they had fallen, the retailer later clarified, blaming the mistake in its trading statement on a “clerical error”.

65 Inches on the television screens that are flying off the company’s shelves, but not fast enough to compensate for its sluggish mobile phone business.

Getting to know: Ralf Speth

Ralf Speth is the chief executive of Jaguar Land Rover, the UK-based subsidiary of Tata Motors that this week said it was “taking action to optimise performance, enable sustainable growth and safeguard the long-term success of our business”. Which is the polite way of saying that it’s cutting 10 per cent of its British workforce.

With demand from China on the volatile side of late, Jaguar Land Rover didn’t have the best of 2019s, and now the German car industry veteran (64) is contending with Brexit, of which it is safe to say Dr Speth, aka Sir Ralf Speth, is absolutely not a fan. About 500 jobs will be cut from its factory near Liverpool in a move that wasn’t linked by the company to Brexit, though Speth’s previous warning that a hard exit – still a possibility if trade deal negotiations stall – could kill off entire industries has been ringing in more than a few people’s ears.

With the “streaming wars” heating up by the day, the fourth-quarter earnings of market leader Netflix were always going to be closely watched. So what did its latest letter to shareholders have to say?

1. “Big headstart.” Netflix insists it isn’t worried about the launch of Disney+, Apple TV+ or any other streaming newbie – not worried at all. There’s “ample room for many services to grow as linear TV wanes” is its bullish message.

2. Churn levels. The rate at which its US subscribers are cancelling their subscriptions continues to be “slightly elevated”, it noted, enough for it to factor it into their forecasts.

3. Witching hour. The Witcher, the fantasy series starring Henry “Superman” Cavill, is popular – indeed, it’s on track to be its biggest ever first season, said Netflix, which threw in a favourable Google Trends chart showing more people had searched for the title than for rival hits such as Disney’s The Mandalorian.

4. Mobile-only. After launching a mobile-only plan in price-sensitive India, Netflix has now introduced similar plans in Malaysia and Indonesia in a bid to keep growing those subscriber numbers (now 167 million worldwide).

5. Two-minute wonder. Subscribers only need to watch a title for two minutes now to be counted in Netflix’s own viewing metrics. Before, they needed to watch 70 per cent of a single episode to be classed as a “viewing household”.