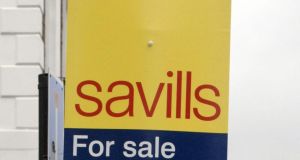 Property agents Savills is predicting a sharp slowdown in house price growth in Dublin in the coming months as the supply of new homes ramps up.

The firm said the first indication of this “cooling off” should be revealed in the official house price figures for May, which will be published on Friday.

“Housing completions were up 46 per cent in 2017 and, despite weather-related disruptions, this continued in the first quarter in 2018, with a 27 per cent year-on-year expansion,” Sean O’Malley, senior economist at Savills, said.

“While the market clearly remains undersupplied, increased construction activity is slowly bridging the gap between demand and supply,” he said.

“The impact of this will be to gradually moderate the rate of house price growth,” Mr O’Malley said.

He said he expected annual property price inflation in Dublin to cool to about 8 per cent by the end of the year, down from the current rate of 12.5 per cent.

Mr O’Malley said the expected slowdown in May was also likely to be driven by the so-called “base effect” – the year-on-year comparison with May 2017, which saw a sharp uptick in price growth.

Savills’s prediction of a slowdown comes as a new Government report warns that the current housing crisis is likely to last for the “foreseeable future”.

The warning, contained in the latest National Risk Assessment report compiled by Taoiseach Leo Varadkar’s own officials, highlights issues with affordability as a “growing risk” that was likely to persist even as housing supply increases, with rising wages driving house prices even higher.

“To put figures on it, average gross weekly earnings rose by 7.3 per cent between the start of 2013 and end-March 2018, whereas house prices have risen by 67.4 per cent and rents have risen by 39 per cent,” he said.

Savills recently calculated that, on average, rents here consumed approximately 41 per cent of household disposable incomes, putting the Republic at the top of the European league table

“This has clearly been exacerbated by tighter mortgage lending following the introduction of the Central Bank’s macro-prudential measures in February 2015,” Dr McCartney said.

“In my view Help-to-Buy has not been helpful as the subsidies have simply been inflated away,” he said.

Savills recently calculated that, on average, rents here consumed approximately 41 per cent of household disposable incomes, putting the Republic at the top of the European league table.

“This situation has obviously made it harder – particularly for younger people (who have less equity) and persons living on their own (who can’t share the burden of housing costs) – to buy and, indeed, meet their rental payments,” he said.

“Our expectation is that house price inflation and rents are now both on a glide path to softer growth,” he said.

However, Dr McCartney said that with the labour market becoming more competitive for employers, this will lead to faster earnings growth, which would underpin further house price growth.

1 How do you know if you are wealthy? ( It’s not straightforward!)
2 Galway development could transform skyline with 21-storey tower
3 High Court overturns permission for height increase in Dublin apartments
4 The gadgets that can make travelling a bit more enjoyable
5 Big tech ‘procedural queries’ delay decision on first data fines – watchdog
6 How can I view my dead brother’s will if I’m not the executor?
7 Planning permission refused for major new office block in Galway city centre
8 Ardagh sees earnings growth slowing after solid 2019
9 ESB called out for ‘contributing to human rights violations’
10 AI is no more the end of the road for labour than the plough was
Real news has value SUBSCRIBE