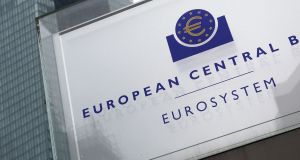 The ECB left its main rate at zero, as expected. Photograph: AFP via Getty

European Central Bank (ECB) president Christine Lagarde called on governments to launch an “ambitious and coordinated” financial response in light of the “major shock” to economic growth caused by Covid-19, as her institution disappointed financial markets by leaving its key interest rates unchanged.

“Governments and all other policy institutions are called upon to take timely and targeted actions to address the public health challenge of containing the spread of the coronavirus and mitigate its economic risk,” Ms Lagarde said at a press conference on Thursday in Frankfurt.

“In particular, an ambitious and coordinated fiscal policy response is required to support businesses and workers at risk.”

European shares – measured by the pan-European Stoxx 600 index – plunged by a record 11.5 per cent as investors baulked at the ECB’s failure to follow the US Federal Reserve and Bank of England in cutting rates, even though the euro zone organisation did not have the same flexibility as other major central banks as its main rate stands at zero.

There had been an expectation among economists that the ECB would cut its deposit rate, currently at minus 0.5 per cent.

Still, the ECB said that it will increase its quantitative easing bond-buying programme, currently running at €20 billion a month, by a total of €120 billion through the remainder of the year.

The ECB said it will roll out cheap loans for banks, at an interest rate of minus 0.75 per cent, and temporarily ease some of its capital requirements for banks to keep them lending. Ms Lagarde said that the bank “stands ready” to take further action “as appropriate”.

“Within our mandate, the governing council is determined to support households and firms in the face of the current economic disruptions and heightened uncertainty,” she said.

Meanwhile, the European Banking Authority announced that it is postponing to 2021 planned banking stress tests that were scheduled to take place this year.

“This will allow banks to focus on and ensure continuity of their core operations, including support for their customers,” the authority said.

The EBA also added to mounting pressure on the Central Bank of Ireland to allow banks to tap capital reserves set aside for a rainy day to enable them to keep lending. The EBA said that it “encouraged” domestic regulators “to make full use of the flexibility embedded in the existing regulatory framework”.

Goodbody Stockbrokers estimates the removal of a 1 per cent so-called counter-cyclical capital buffer (CCyB) that the Irish Central Bank has required banks to hold against risk-weighted assets since last July could support about €10 billion of additional lending to the economy as households and businesses grapple with the effects of the spread of Covid-19.

Central banks and regulators across the EU have been obliged since the start of 2016 to make lenders ringfence funds as a counter-cyclical capital buffer when they judge that credit growth is becoming excessive.

The buffers are in addition to normal capital reserve demands, and are part of a raft of new rules designed to avoid a future crisis. The extent to which the buffer applies varies across the EU.