Rome to suspend bills, taxes and mortgages to ease pressure on firms and households 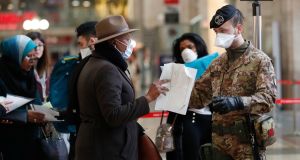 Italy will boost measures to soften the economic impact of the coronavirus such as suspending the need to pay household bills, the industry minister said on Tuesday, calling for the European Union to change its rules to allow more government spending.

The whole of Italy, Europe’s worst-affected country, is under lockdown until next month in an unprecedented attempt to beat the epidemic. With the country already on the brink of recession, the government steps come at a huge cost for the euro zone’s third-largest economy and have alarmed financial markets.

The gap between Italian and benchmark German 10-year bond yields jumped above 200 basis points on Monday for the first time since August 2019.

Industry minister Stefano Patuanelli said the government would approve measures worth around €10 billion to help companies and families, telling Radio Capital this would probably cause the budget deficit to rise to just under 3 per cent of national output this year.

Economy minister Roberto Gualtieri wrote to the European Commission last week to say Rome planned to raise the current 2.2 per cent official target to 2.5 per cent. A government source told Reuters on Monday the Italian treasury was considering lifting it to 2.8 per cent.

Mr Patuanelli said that among a first batch of measures, the government planned to suspend payments of bills, taxes and mortgages in order to ease pressure on small firms and households. Other steps would come later, he added.

The cabinet is due to meet on Wednesday to approve the initial package.

The minister called on the European Union to change its Stability Pact and Fiscal Compact public finance rules once the emergency linked to the coronavirus had settled, saying the economic toll would hit many people.

“We will ask for the rules to be changed. It a necessary condition, otherwise people will die,” Mr Patuanelli said, adding it was “not a matter of ‘if’ the rules will be challenged but how they will.” – Reuters

1 We are ‘sale agreed’, but can we go back with a lower offer?
2 Working from home: New costs, new stresses and little relief
3 Restaurants and gastropubs hope to avoid a dry reopening
4 HSBC board rethinks overhaul and seeks even deeper cuts
5 Eason to lay off 150 staff as it prepares for June reopening
6 Ryanair to challenge Lufthansa’s €9bn aid
7 New pre-booking app for customers a hit with retailers
8 Hot-desking continues at bank call centres, workers say
9 Joint accounts: if one of us dies, can the other access the money?
10 Merck leaps into Covid-19 development fray with vaccine, drug deals
Real news has value SUBSCRIBE