UK turns on spending tap as Brexit and coronavirus bites 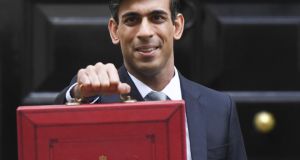 Rishi Sunak, the British chancellor of the exchequer, ahead of presenting the budget in parliament. The UK government is set to ramp up borrowing. Photograph: Chris J. Ratcliffe/Bloomberg

Boris Johnson’s Brexiteer government has unveiled one of the biggest debt-fuelled spending splurges in living memory, one that will see more than £600 billion (€684 billion) of public investment deployed over five years.

It effectively thrashes the country’s 10-year long austerity project and any notion of a balanced budget, a central aim of the pre-Brexit administration led by David Cameron and his finance minister, George Osborne.

Chancellor Rishi Sunak’s budget includes a £30 billion coronavirus package and an additional £175 billion spending on specific infrastructure to boost the UK’s long-term productivity. It will require Britain to borrow almost £100 billion more in coming years than was it planning to do as recently as December.

The fiscal bazooka, coming just hours after the Bank of England cut interest rates, is aimed at guiding the UK economy through a storm. The storm of getting a workable trade deal with the EU and/or with the US in the wake of Brexit and through whatever storm is whipped up by coronavirus, which seems to be edging the global economy towards recession.

“The chancellor has announced the largest sustained fiscal loosening since Norman Lamont’s pre-election budget in 1992,” the Office for Budget Responsibility, the UK’s fiscal watchdog, said.

At the height of the financial crisis in 2009, the UK government loosened its purse strings by £15.7 billion in a bid to cushion the economy from the crash. This budget envisages an £18 billion spending hike in the coming year, building up to £42 billion by 2024-25.

Whether it’s a sign of alarming economic weakness at the heart of the UK economy or Brexit chutzpah, British politics is upside down and the Tory party, the party of fiscal prudence and swingeing health service cuts, has morphed into the party of spend.