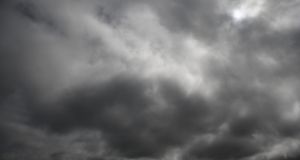 Global storm clouds: economic growth fluctuates, particularly over the short term, for all sorts of reasons

Global growth is slowing. In the US, as elsewhere, sluggishness is centred on manufacturing. Best guesses are that growth has slipped from just over 3 per cent during the early part of the year to perhaps 1.5 per cent now.

That’s not necessarily anything to get exercised about – quarterly percentage changes fluctuate for all sorts of reasons. But the obvious inference is that Donald Trump’s trade wars are having the obvious impact. China, the main but not only target of that trade war, has also slowed.

Europe is also struggling, with one or two countries barely growing at all. The UK of course has more than a few domestic issues to deal with as well as the global trading environment. As a result, some analysts think that British growth may have actually turned negative: odds of a technical recession, at least, have shortened.

While actual and threatened trade tariffs are the obvious cause of all of this, care must be taken: correlation, we must always remind ourselves, is not necessarily causation. Growth fluctuates, particularly over the short term, for all sorts of reasons. Many of these are poorly understood and are often not particularly sinister. Policy makers are usually well advised not to overreact to noisy economic data.

If history is any guide, a period of negative growth is well overdue

Whatever the cause, many forecasters are expecting a global recession over the next year or two. The current expansion is very old in the tooth and, if history is any guide, a period of negative growth is well overdue. It’s a funny way to forecast, but this line of thinking is surprisingly common. It is as if there is a mysterious rhythm to the global economic cycle that is bound, for unknown reasons, to repeat itself.

These kind of expectations, if allowed to run too far, could be self-fulfilling. Recessions happen when people – either consumers or businesses – stop spending or investing.

That can occur because of something tangible – big rises in interest rates for instance – or as a result of something far more ephemeral: pessimism, even of an unwarranted kind, can drive economies down.

Arguably, the list of things to worry about is a long one. The prime suspect, a trade war, is a big concern. America’s row with China is about much more than trade, of course. It is the long-awaited clash between, on the one hand, the world’s established power and, on the other, the obvious contender for the title.

The contest between the US and China is regularly described as a version of Thucydides Trap: war between Sparta and Athens became inevitable when the rise of the latter caused fear in the former.

Some commentators fear that even if Trump reaches some kind of deal with China at the upcoming G20 summit, it will only be a truce in a conflict that could rumble on, perhaps even escalate, over many years. More generally, Trump’s desire to pick a fight with former allies over just about anything does not bode well.

Britain’s descent into populist chaos continues apace. Boris Johnson is already being talked about as the worst British prime minister in history even before his seemingly inevitable correlation.

In one of the many oddities of the contest to succeed Theresa May, Johnson is campaigning by becoming almost invisible. Clearly, his advisers have told him that the only contestant who can defeat him is Johnson himself. So he doesn’t say much and has largely disappeared.

What little he has said is what we would have expected: his big economic idea is a Trump-style tax cut for the rich. That might go the way of most campaign promises of course, but the bigger question is, inevitably, about Brexit. It’s hard to see any route that doesn’t see Johnson trying to leave without a deal at the end of October. Parliament’s power, or even desire, to stop him is now an open question.

The only adults in the room are central bankers. But their ability to mitigate the economic fallout from political chaos is heavily circumscribed. Their tools are financial but the problems are not really anything to do with finance. Those tools are, mostly, interest rates which, of course, are already extremely low in many countries.

The ECB could, in theory, cut rates again but that would be a policy experiment of a most unusual kind: we would have to think about, maybe, the consequences of negative mortgages rates. That’s as bizarre and unlikely as it sounds. At the very least, we would see European banks going bust pretty much everywhere.

So it would be easy to work ourselves up into a pessimistic paroxysm. But, in my view, that would be wrong. Those analysts who think a recession is due because of the lessons of history should broaden their perspective: expansions don’t just die of old age.

Full employment, positive technological change and institutional architecture designed to mitigate political nuttiness are all positives. Those of us of a certain age can recall the constant threat of war between Russia and the US didn’t derail the global economy and, most importantly, didn’t happen.

Lessons are, sometimes, learned: the rise of Green politics and a quietly growing consensus that the worst excesses of inequality must be tackled are both additional reasons to be cheerful. Just because we pretentiously quote a long dead classical author doesn’t mean Thucydides has any relevance to the 21st century.