Trade wars, slowing economic growth and uncertainty run the risk of recession in a US election year 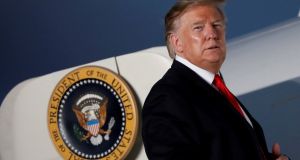 The thing that affects equities the most these days is the latest tweet from Donald Trump. Photograph: Carlos Barria/Reuters

The stock market has just had its worst month of the year. How big a concern is this? The answer is usually “it all depends”: one month’s gyrations in global equity prices mostly contains as much useful financial information as a deck of Tarot cards. But there is an awful lot going on, a number of factors combining to make investors extremely nervous. For once there just might be something serious to be worried about.

Before we get to those concerns it is worth stating upfront that there will be unusual political – as well as the usual economic – consequences if stock markets are actually correct in their worries about the future. It all comes down to the cycle: if global growth is likely to slow further, perhaps to the point of recession, that’s bad in itself but it will have profound implications for political dynamics in not least the US, Europe and China. And therefore Ireland.

We may look back on the current period as the sweetest of sweet spots for the Irish economy: from that perspective this may be the optimal economic time for Leo Varadkar to call that general election.

Stock markets usually respond to changes in the outlook for profits. That’s still true, but there is a new driver of those earnings forecasts. We have a new thing to worry about, not just the outlook for sales, costs, interest rates and the like. The thing that affects equities the most these days is the latest tweet from Donald Trump.

Trump’s latest swipe at stock markets came in the form of his promise to wage a trade war with Mexico if it does not do what he wants. Some analysts are baffled because Trump usually likes to tweet about the latest rise in the Dow Jones index. He has viewed the equity market as a barometer of his presidency. But he has been acting to drive the market down. What’s going on?

Perhaps he likes trade wars more than he wants the stock market to go up. It’s possible, although probably a little fanciful, that he thinks he can push the market down for a while now and then change tack later this year and engineer a rising market through 2020, a presidential election year. Part of that conspiracy-type thinking has the Federal Reserve slashing interests rates in the pre-election period, partly in response to the same worries gripping stock prices.

Markets are mostly concerned about trade and economic growth. The unresolved battle with China is one thing. Trade battles with Mexico, something we thought had been sorted, is new. Supply lines will be disrupted, perhaps on a bigger scale than with China, and prices for US consumers will rise.

Growth, if the trade wars escalate, will slow. It can’t be said often enough that the biggest losers from Trump’s trade wars will include the citizens of the United States.

It’s not just equities. Bond markets are also signalling lower growth ahead. Investors now have to pay a hefty price for the privilege of lending to the German government. That’s right, a buyer of German government bonds is guaranteed to lose money, at least if they hold those bonds to maturity (chances are, in my view, that they will lose money over almost any time period).

For all the dysfunction of the UK government, lenders only demand 0.9 per cent a year interest to lend to Boris Johnson and Co for the next 10 years. Those low bond yields are another pointer to lower economic growth ahead.

Trump may well be right if he believes he can turn the stock market with a tweet. He can certainly prompt waves of equity selling. But he is playing with fire. If negative momentum does build over the next few months 2020 could be a recession year for the US economy. I doubt very much that his re-election plans have that as scenario A.

One possible calamity could be that the Fed doesn’t cut interest rates when it should precisely because it does not want to be seen to caving into Trump. Arguably US interest rates are already too high for this very reason. If he does lose the election I can easily see him scapegoating the US central bank.

A slowing world economy and a likely hard Brexit at the end of October will be particularly toxic for the UK but it won’t be pleasant for Europe either. Growth in Europe is nothing to write home about, and a European recession could well see us revisit the euro crisis.

Just how Italian and Greek politicians in particular respond to another economic slump is difficult to imagine. Or perhaps too awful to contemplate.

None of this is guaranteed, of course. Markets go up and down, often signifying nothing. But the clouds are gathering. And a lot of our economic futures are going to be determined by whatever Trump feels moved to tweet about next.