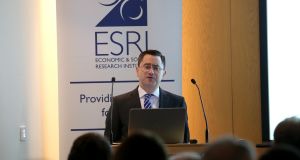 The Irish economy is on a knife-edge, poised between “overheating” and a major Brexit-related downturn, the State’s chief economist has warned.

He said overheating could transform rapidly into “underheating” as a result of a cyclical downturn internationally, made worse by Brexit and trade tensions between the US and China.

Mr McCarthy was speaking at a budget conference hosted by the Economic and Social Research Institute (ESRI) .

“At the moment we’re on the verge of overheating, the economy is at full employment, the output gap is probably moving into positive territory, wages are beginning to pick up,” he said, adding that this situation could change very quickly.

“So we could rapidly go from an overheating situation right now to underheating in six months’ time if you get some of these issues beginning to happen,” said Mr McCarthy.

This would have implications for the Government’s current budgetary stance and Budget 2020, which is due to be presented just before the UK’s scheduled exit from the EU on October 31st.

While economists typically advocate taking money out of the economy in the case of overheating, usually in the form of tax rises or spending cuts, the opposite is true in the case of a severe shock, with governments then encouraged to boost demand through tax cuts and/or increased spending.

Mr McCarthy said there might be a role for “discretionary policy to support the economy” in the event of a hard Brexit, but declined to specify the form this should take.

Nonetheless, he said, the stimulus would have to be targeted to the sectors most exposed, and would have to be temporary “because something like Brexit is a permanent structural change to the economy”. This would mean any stimulus could not be supported indefinitely.

The Department of Finance believes that economic growth in the Republic could be reduced by over 4 per cent from the current projections in the event of a hard Brexit, with unemployment rising by two percentage points. However, some economists believe this underestimates the likely impact.

In 2007 the Irish economy was overheating, with wages and prices rising at unsustainable rates, but this was soon overtaken by the major global downturn triggered by the financial crisis.

“What’s different between then and now is that now we know things are coming down the line. We all know Brexit will happen at some stage, nobody ever saw the global financial crisis, hence we’ve no excuse,” said Mr McCarthy.

The Department of Finance came under fire again this week from the Irish Fiscal Advisory Council (Ifac), which claimed it was failing to deal with persistent budget overruns in health while using potentially temporary corporation tax receipts to paper over the cracks.

The fiscal watchdog also warned that the department and the ESRI had jointly underestimated the impact of a hard Brexit on the public finances.