Legal and other experts paid €7.1m so far 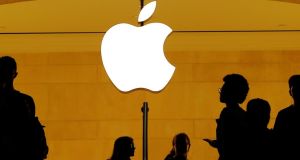 So far this year the Government has paid €142,116 to barristers retained in relation to the Apple tax case. Photograph: Lucas Jackson/Reuters

Barristers have been paid €2.7 million by the State in relation to the European Commission’s €13 billion ruling on State aid to Apple.

However, the Minister for Finance Paschal Donohoe said that, following legal advice, he could not disclose the identities of the barristers concerned.

The Government has paid €7.1 million in total to barristers, solicitors and experts concerning the Apple tax case, Mr Donohoe said.

In a written Dáil reply to Labour Party TD Alan Kelly, Mr Donohoe said: “We have received legal advice that the disclosure of information relating to professional fees paid to named barristers on foot of a parliamentary question is likely to be in breach of the GDPR and the Data Protection Act.

“It is, however, possible to provide anonymised or aggregated information regarding counsel’s fees provided that this is done in such a way as to protect the identity of the individual barristers.”

On Friday, Mr Kelly said: “A decision not to provide information on which individuals are in receipt of large amounts of taxpayers’ money is not acceptable and cannot be excused by using GDPR as an excuse.”

“The Dáil and the public has a right to know the names of the people being paid. What is the real reason that the names are being withheld given that they were previously released. If the Minister doesn’t provide the information then I will be bringing the matter before the Public Accounts Committee (PAC).

On May 24th last year, Mr Donohoe disclosed the then up-to-date individual payments to named barristers to Mr Kelly in a written Dáil reply, the day before GDPR was introduced.

Mr Donohoe said the case has involved a significant degree of legal and technical complexity, and additional expertise has been engaged where required.