Chris Johns: Freedom nowadays means the right of jerks to be jerks

Our politicians could level with us on the Covid crisis, but for various reasons they chose not to 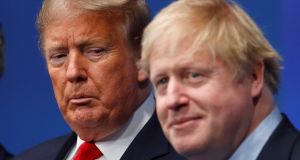 In this binary world of Donald Trump and Boris Johnson, everything is political so the economics becomes irrelevant

TS Eliot believed that “humankind cannot bear much reality”; Jack Nicholson famously told us that “we can’t handle the truth”.

Neither the poet nor the actor would have had coronavirus in mind, but I suspect that their remarks would, in today’s epidemiological landscape, have been the same. Their words have general applicability, and have stood the test of time.

No politician is able to speak the truth, at least the whole truth. The speech that I suspect one or two of them would like to make goes something as follows:

“Coronavirus presents us with unprecedented (at least in modern times) complexity and uncertainty. We don’t know very much, but we are learning all the time. There is no such thing as ‘the’ science, but there is science.

“We aim to suppress/mitigate/eliminate (delete as appropriate) the virus but we are not sure how. As we get more data we will, hopefully, learn enough. As the evidence comes in we will make decisions accordingly.

“We will share that data with you along with the decision-making processes that we use. In particular, we will publish each of the epidemiological models that we deploy, including all their updates. Our decisions will be as clear as the reasons why we took them.

“Sometimes those decisions will be different, perhaps very different, from the ones we made the day before. We call that learning by doing. Our opponents will scream ‘u-turn’ but we trust the wider public to understand that this is not politics but decision-making under incredible uncertainty.

“Each of us are decision-makers. We will set public policy – the rules – and you will behave accordingly. We will also make non-binding recommendations that we hope will make sense to you.

“Each of you will be trusted to make your own risk-based assessments of how best to behave given all of the uncertainties and complexities. We live in a stochastic – non-deterministic – world. That’s jargon for saying the truth is out there but it may never be fully known and, in any event, it is unlikely to be constant.

“Our aim today is to make our behavioural choices around coronavirus as explicit and fully informed as possible. Just as we mandate that you drive on the left or not punch each other in the face, we also have non-binding societal norms around respect and courtesy. Covid-safe behaviours are similar: we set the laws and also make strong suggestions about norms. All as evidenced-based as possible.

“This approach has the virtues of honesty, clarity, simplicity and embodies as much truth as the data allows.”

Clearly few governments around the world either share the sentiments behind these thoughts or, if they do, feel able to share them with us.

Most electorates are given the mushroom treatment. Politicians vacillate over the basic objective and then change policies based on who knows what.

Boris Johnson in the UK is perhaps the prime example of this, caught between scientists who argue for ever stringent lockdowns and finance types, such as his chancellor of the exchequer, who want to prioritise the economy.

Johnson’s decisions seem to depend on which tribe he has most recently spoken with.

The two tribes of “downers and uppers” have a third tribe throwing slings and arrows at them: the economics profession can’t quite decide about whether or not locking down versus opening up is a false dichotomy.

Our inability to handle complexity and probabilistic outcomes is painfully evident. We are sustained by myth and superstition rather than getting to grips with messy reality.

We prefer leaders who profess, via bluff and bluster, certainty. Our culture is dominated by bosses – of nations and businesses – who always speak in terms of binary possibility: I’m right, you’re wrong. In such a world it becomes paramount never to explain, never apologise.

In this binary world everything is political so the economics becomes irrelevant. The only thing that matters is to be right even when you are obviously wrong.

So when Trump supporters are presented with evidence that they are demonstrably worse off they couldn’t care less.

And when Brexiteers see all the predictions of “project fear” coming true without any of the promised sunny uplands, they all say loudly “I don’t care”.

David Frum, a leading and unusual (right-wing) critic of Trump, describes modern America in terms of the freedom of “jerks to be jerks”.

When he first coined this aphorism I thought it a little harsh: Trump as “leader of the a jerk-liberation movement” that gives people permission to behave like cretins without shame or apology.

I preferred to think of both Trump and Brexit in narrow economic terms, the justifiable rage of the left-behind (but with a mistaken diagnosis about how they solve their real problems).

Our collective response to coronavirus has led me to think that Frum was right, not just about Trump but in a wider context.

Maybe we are all jerks now, at least in the sense that both Eliot and Nicholson suggested. Not only are we not trusted with the truth, we don’t seem to want it.