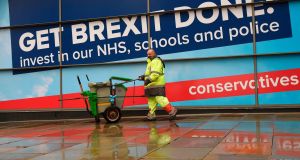 A worker walks past the Conservative Party branded sign that reads ‘Get Brexit Done’ outside Manchester Central convention complex ahead of the party’s annual conference. Photograph: Oli Scarff/AFPGetty Images

Neutrals and fanatics are united by the belief that getting Brexit done will bring an end to the current chaos. Closure is an overused word but it is often deployed by those who are either bored, terrified or angry about Brexit. Even some Remainers now think that a negotiated exit, soon, is the only way to allow the UK to move on. This belief is a dangerous delusion.

For all of the understandable fury with the language used this week by Boris Johnson his strategy is logical. If he can gather a good chunk of Nigel Farage’s vote he will come close to the magical 35 per cent share of the electorate that will probably get him a majority in the imminent general election.

Nothing is certain, much depends on tactical voting. But winning the general election is the only objective: a goal that requires an appeal to every Brexit voter. The tactics we see, the language and behaviours that appal so many observers, are driven solely by the need to attain that magical 35 per cent number.

Johnson’s strategy has a good chance of working. He has had seven successive defeats in the House of Commons and been battered by the supreme court ruling of unlawful behaviour.

Nevertheless, he is ahead in the opinion polls. What, we might wonder, will five years of Johnson look like? An electoral success based on Trump-style tactics is hardly consistent with political and social harmony.

It would be easy to marvel at the inadequacies of an opposition that cannot take advantage of a government in chaos, a prime minister seemingly determined to stretch Britain’s constitution to breaking point. Tempting – and important – as that is, I want to focus on the desire for closure. “Make it stop” is probably the most strongly held view about the poisonous Brexit process – even if the only way of lancing the boil is to get Brexit done.

Of course, there are many different short-term scenarios. But will any of them permit the much desired closure? Is a resumption of business as usual even possible?

Former prime ministers are speculating about how the current one plans to circumvent the law. The last chancellor of the exchequer, Philip Hammond, recently stated in the The Times newspaper that Johnson is “backed by speculators who have bet billions on a hard Brexit”.

How is any of this remotely consistent with imminent closure?

Brexit will either be hard, soft or absent. Even the advocates of the hardest of Brexits admit there will be economic disruption, if not the catastrophe feared by many of us. The purely financial consequences will be bad or terrible, depending in part on how the EU-UK trade negotiations progress.

The social and political damage, on obvious display in recent days, will last a long time. Sinister figures are now suggesting violence is on the cards if Brexit is cancelled or even just delayed.

A soft Brexit would, perhaps, look something like Jeremy Corbyn’s yet-to-be-negotiated deal: close alignment with everything apart from a seat at the rule-making table. It would settle nothing: Brexiteers would simply hunker down for the next phase of the war they have been waging since the 1970s.

Theresa May’s Withdrawal Agreement has sometimes been incorrectly described as a soft Brexit – it’s anything but. In any event, even if it comes back with an amended/relabelled backstop and is approved by both the EU and the House of Commons, unlikely as that sounds, it still leaves the future relationship completely unresolved.

One or two Brexit ultras think the route to a cliff-edge exit now lies down this path: allow the Withdrawal Agreement to pass, with the transition phase now set to expire a mere 15 months away. That’s right: strategies are being developed for the next phase of the Brexit war. This is the stuff of permanent revolution.

The new date for a hard Brexit then becomes the end of 2020. The transition talks won’t go well and can be sabotaged, particularly if they are conducted by a Johnson-Dominic Cummings administration. But it’s hard to see Johnson winning an absolute majority if he exits without the approval of Farage: any version of Theresa May’s deal risks handing the Brexit Party a say in the next parliament and you can imagine the consequences of that.

Johnson is making noises about distancing the UK from close regulatory alignment with the EU. This only adds to the difficulties of negotiating a comprehensive free trade agreement. Johnson has recently mused about the UK becoming a low tax, less regulated competitor. The response from Europe has been predictable. He may think he is negotiating, he may be serious. Either way, it is another piece of evidence consistent with a fundamental misunderstanding about how Europe functions. If transition happens, the omens for smooth passage are not good.

It may seem quaint to talk about public finances but older readers will remember how they can be important. The UK’s fiscal position is deteriorating rapidly. There are lots of reasons for this but the outcome is that any claim to fiscal responsibility is about to lose all vestige of credibility, particularly given the ever-larger spending commitments of both main political parties.

Brexit of any kind plus any one of the possible outcomes of the forthcoming general election will resolve precisely nothing.