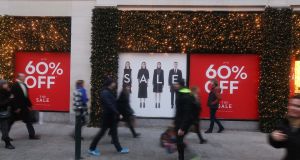 January is typically the biggest month of the year for VAT as it reflects the busy November-December shopping period.

VAT receipts jumped to a record €2.7 billion in January as strong pre-Christmas sales boosted the Government’s tax take for the month.

The latest exchequer returns show the sales tax accounted for more than half the €5.4 billion in tax collected by the Government last month.

January is typically the biggest month of the year for VAT as it reflects the busy November-December shopping period.

The Department of Finance said the sharp rise in online sales linked to events such as Black Friday and Cyber Monday was a “contributory factor”.

Retail sales, as measured by the Central Statistics Office, fell in December but the figures may not be capturing the full extent of the online spend.

The exchequer numbers for January show income tax was also strong, generating €1.88 billion, which represented a year-on-year improvement of 7.6 per cent.

Corporation tax, which hit a record level last year, came in €127 million behind target. The department said the year-on-year decrease was primarily due to corporation tax repayments while noting that January was not a significant month for the business tax.

Excise duties amounted to €464 million, representing a marginal year-on-year decrease of €14 million or 2.9 per cent.

While monthly tax returns fluctuate, the figures left the exchequer with a surplus €1.6 billion in January compared to a surplus of €1.53 billion in the same period of a year earlier.

The €114 million year-on-year improvement was primarily due to increased tax revenues and non-tax revenues, which was offset by increased expenditure.

Total net voted expenditure, at €4.2 billion, was up 6.5 per cent in year-on-year terms.

The Irish Fiscal Advisory Council last year rebuked the Government for “repeatedly” breaching its own budgetary targets and for using the current windfall in corporation tax to paper over cracks in its health spend.

Responding to the latest figures, Cantor Fitzgerald analyst Alan McQuaid said: “Personal spending was probably stronger than the official retail sales would suggest, but the question is will the receipts hold up, particularly if there is bad news on the Brexit front.

“The record level of money held on deposits [€104 billion] by households in December suggests consumers are still in the main cautious and won’t be slow to rein in spending if things do go pear shaped on the economic front.”