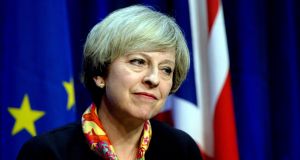 British prime minister Theresa May. “Theresa May has caved on all of her red lines with more humiliating concessions to come.” Photograph: Cyril Byrne

With just under a year to go until Britain leaves the European Union a new Brexit lie has emerged. Actually, it’s a variant on an old theme: the infamous “£350 million a week for the National Health Service (NHS) if we vote Leave” has become a promise.

It is, of course, perfectly possible for any government to commit – and to deliver – any amount of extra funding for healthcare. The lie is that more cash for the NHS will come from a “Brexit dividend”. It’s a political sleight of hand that is just one more disgrace to add to the litany of lies that continues to accompany the Brexit process.

More money for the NHS has to be found. That much is certain, given the financial pressures on the health system. The problem for any politician promising more money – for any needed service or pet project – is that the cash has to come from somewhere.

Accounts have to add up – an inconvenient truth. Brexit has already resulted in lower economic growth than would otherwise have taken place and will continue to do so for as far as the eye can see.

Lower growth means lower tax revenues and higher government spending, Because of those pesky accounts, that means either more government borrowing and/or higher taxes. So far, the choice made by the government is, from now on, to borrow more – although you wouldn’t know this unless you have some familiarity with basic arithmetic and government accounts.

It’s an unannounced end to the fiscal austerity launched by the previous David Cameron/James Osborne administration.

Borrowing more for the health service is a legitimate political choice, albeit one that stores up potential financial problems in the future. As the UK economy chugs along at a pathetically low growth rate – bottom of the global league table – and the the ratio of taxpayers to pensioners inexorably falls, creating more health spending needs, sooner or later more difficult choices will present themselves.

UK social insurance contributions should always be checked out by Irish taxpayers who moan about the USC. Its rates of national insurance are already at eye-watering levels compared with our own. But all of this is going to be called a Brexit dividend.

Orwell couldn’t have made it up. Just one more whopping great lie. Should we be surprised that people fall for it? Should we be astonished that the media – both mainstream and social – is utterly unable to call out politicians who continue to lie?

One or two brave commentators liken the current atmosphere to the one that must have prevailed in the latter days of the Soviet Union: even die-hard communist apparatchiks knew it was all nonsense but nobody had the political or moral courage to say so.

The mood was captured beautifully by the BBC during a recent group chat between Evan Davis of Newsnight and a cross-section of Leave and Remain voters.

Few people have changed their minds: on all sides the mood is sullen and resigned. People are weary and say they just want the government to get on with it. That they are confused by the complexities of the interminable negotiations is very evident. It’s like watching a group of plumbers, doctors, lawyers and teachers pontificating on how best to clean up after a Fukushima-style nuclear accident.

Everybody (mostly) is well-meaning, convinced that that they have the right answers and are angry with anyone who disagrees. Politicians pander to focus groups and mock the warnings of experts. The result is not too different to mob rule.

Things will continue to go wrong and promises will not be delivered on. Theresa May has caved on all of her red lines with more humiliating concessions to come.

So far, all this achieves is further polarisation of opinion: the centre ground becomes an ever more lonely space. The unity of the Brexiteer response is, in a way, impressive. Their strategy is clear: just hold your nerve for another year, get Britain out at the end of next March and the job will be done. It’s like watching Mourinho’s Manchester United: win the next match in the ugliest way possible and don’t worry about the longer-term consequences.

That the strategy condemns you to never really win anything important is beside the point. It will be somebody else who eventually has to clean up the mess. Brexiteers really are like members of the old Soviet politburo pretending that communism delivers both economic prosperity and social progress.

Optimists on both sides think that the Irish Border and the overall withdrawal agreement can be sorted or, more likely, successfully fudged by the autumn.

Necessary parliamentary ratifications can then take place in the window between then and March 2019. Avoidance of an end-2020 cliff-edge can be left to talks that will take place after Britain has left. Never have so many cans been so firmly kicked by so many.

1 Irish household wealth jumps by 74% since last recession - report
2 ‘Tax war’ will hit Ireland if digital tax talks fail, OECD says
3 Will brother’s widow get half of our parents’ estate when they die?
4 Should I switch bank now with Ulster Bank at risk of closing?
5 EU said to be leaning towards appealing Apple tax decision
6 House insurance: save yourself money by reviewing your policy
7 Tánaiste urges businesses to brace for Brexit with 100 days to go
8 Banks face ‘hectic’ loan restructuring as payment breaks end, Goodbody warns
9 Legal tech company Bundledocs raises €600,000 in funding
10 Edwards to create 120 jobs in Dublin as part of $7.5m investment
Real news has value SUBSCRIBE