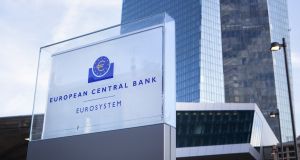 Brussels is considering a €50 billion raid on European Central Bank profits and a plastics tax to plug a hole in its long-term budget after Brexit.

The European Commission’s ruling college will on Wednesday discuss ways to find new sources of revenue to maintain its financial firepower once the EU’s second-biggest net budget contributor leaves the bloc in 2019.

One of the measures under discussion is a plan to divert profits made by the euro zone’s 19 national central banks from printing banknotes straight into EU coffers. The commission estimates the revenue stream could generate €56 billion during the seven-year span of the next EU budget.

More than 90 per cent of the so-called seigniorage profits are distributed by the ECB to the euro zone’s 19 central banks that often pass a portion on to their national treasuries.

The commission is considering an ECB cash raid as a quick way to generate money for the common EU pot as the likes of the Netherlands and Austria refuse to raise their contributions to the €1 trillion EU budget after the UK’s departure.

“It is one of the low-hanging fruit ideas for the budget” said one EU diplomat. Another senior official from a euro zone country said consultations had started between his national government and central bank over transferring seigniorage money to Brussels.

The commission is also drawing up plans for a so-called “plastics contribution” to widen its spending resources. In January, Günther Oettinger, budget commissioner, said details of the plastics tax design would be announced in the commission’s formal budget proposal in early May.

Brussels’ politically charged budget discussions often pit rich net contributors such as France and Germany against poorer beneficiaries such as Poland and Hungary. But the latest round of negotiations for the budget that runs from 2021 has been complicated by the Brexit black hole, policy challenges such as migration, and a French-led push to create euro zone-only spending tools.

While the commission is responsible for proposing a plan on how to structure the common budget, final decisions on its size and composition will rest with national governments which are gearing for discussions over the coming months.

In response to ideas from Emmanuel Macron, the French president, to reinforce the euro zone’s crisis-fighting armour, the commission will in May announce plans for a “fiscal stabilisation function” to protect investment spending when a euro zone member state suffers an economic downturn.

But the idea, which falls short of the French vision for a rainy-day fund, already risks running into opposition led by the Dutch and the Finns who want governments to fix their public finances rather than gain access to more EU-wide funding.

In an effort to assuage the concerns of hawkish governments, Brussels is exploring a system of grants and soft loans that euro zone countries can access in times of trouble.

“We are now working on a concrete proposal which would work with loans and possible limited grants,” Valdis Dombrovskis, the commission vice-president, told MEPs on Tuesday. The commission is also leaning towards a design for the new system that would involve the European Stability Mechanism, the euro area’s sovereign bailout fund.

The bulk of the EU’s long-term budget is made up of contributions from member state governments, with about 20 per cent coming from EU-wide revenues known as “own resources” such as VAT and customs duties.

The commission aims to bridge the €15 billion-a-year financing gap after Brexit through an equal mix of spending cuts and fresh money.

But EU governments have long resisted Brussels’ attempts to generate its own revenue-raising tools such as EU-wide taxes which, they argue, take money away from national coffers.

Officials also warn any raid on ECB profits risks angering national central banks which fiercely prize their independence from political interference and are currently able to use their profits as they see fit. In Germany for example, the Bundesbank hands a portion of its annual profits to the government treasury every year.

Critics also point out that seigniorage is a highly volatile source of revenue. Low interest rates mean the ECB has generated no profits on printing banknotes since 2015, according to its latest annual report.

Wednesday’s internal commission meeting will enable the commissioners to have a political discussion on how to shape the budget plans before they are announced in May.