Commissioner instigated the clawback of Irish state aid from Apple 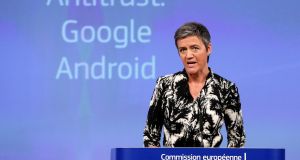 EU competition commissioner Margrethe Vestager is to retain her post.

Margrethe Vestager, the EU’s competition chief, will retain her role as the bloc’s antitrust enforcer in Ursula von der Leyen’s team in a move likely to spark criticism from the White House.

In one of the big surprises in the new European Commission line-up, Ms Vestager, who has been dubbed the “tax lady” by Donald Trump, will continue in her role policing mergers and state aid for the next five years.

Ms Vestager will also lead Brussels’ digital policy as an executive vice-president in the new commission.

Ms Vestager instigated the Apple state-aid case which resulted in the iPhone-maker being asked to to pay back €14 billion to the State. Apple’s appeal is due to be heard on Tuesday and Wednesday of next week. She also dished out record fines to Google.

The announcement came from commission president-elect Ms von der Leyen in her first press conference to announce her college of commissioners on Tuesday.

In other big moves, Italy’s commissioner nominee Paolo Gentiloni will become the EU’s new economics chief, and France’s Sylvie Goulard will lead the bloc’s push to create an industrial policy, leading on defence and the single market.

Belgium’s Didier Reynders and the Czech Republic’s Vera Jourova will both oversee compliance with the rule of law. Ireland’s Phil Hogan has been nominated as trade chief.

In her new role, Ms Vestager will be in charge of devising new tech regulations including a sweeping Digital Services Act to police companies such as Facebook and YouTube. She will also manage issues like cyber security, and enforce a competition rule book that has already led to multibillion-dollar fines for tech companies.

Responding to her appointment, Ms Vestager said in a tweet: “Integrity, independence and confidentiality of our law enforcing procedures are non-negotiable.”

The choice of an Italian in the economics job is a controversial move as successive Italian governments have been at loggerheads with Brussels over its compliance with budgetary rules.

Ms von der Leyen said the role of enforcing and reforming the budget rulebook would be “balanced” with Valdis Dombrovskis, an executive vice-president in charge of financial services and the euro from Latvia.

The UK, which is due to leave the bloc on October 31st, did not nominate a commissioner. Ms von der Leyen said Brexit was in a “difficult process”.

“Brexit, should it happen, is not the end of something but is the beginning of our future relationship.”

Should the UK gain an extension to its Brexit process, Ms von der Leyen said the UK would have to nominate a commissioner and be assigned a job in her team.  – Copyright The Financial Times Limited 2019