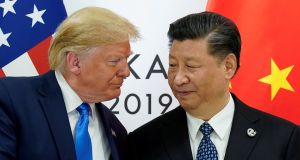 US president Donald Trump is fighting a tariff war with with China over Beijing’s trade surplus and technology ambitions.

China’s economic growth has sunk to a 26-year low in the latest quarter amid pressure from a trade war with the US.

The world’s second-largest economy expanded by 6 per cent in the three months ending in September, down from the previous quarter’s 6.2 per cent.

It was the weakest growth since China started reporting data by quarters in 1993.

The slump adds to problems faced by Chinese leaders, including rising inflation and weaker consumer demand, as they fight a tariff war with US president Donald Trump over Beijing’s trade surplus and technology ambitions.

“Pressure on economic activity should intensify in the coming months,” said Julian Evans-Pritchard of Capital Economics in a report.

The unexpectedly weak data raise the likelihood of interest rate cuts and other stimulus to shore up growth and avert politically dangerous job losses.

Chinese leaders have boosted government spending but avoided a large-scale stimulus until now for fear of reigniting a rise in debt that already is so high that rating agencies cut Beijing’s credit rating.

The slowdown in China, the world’s biggest trader, has global repercussions. It is depressing demand for industrial components from Asian countries. Prices of soybeans, iron ore and other commodities have fallen, hitting Brazil, Australia and other suppliers.

Consumer prices have spiked due to a disease outbreak in China’s vast pig herds that is disrupting pork supplies.

The International Monetary Fund cited the US-Chinese tariff war in this week’s decision to cut its 2019 global economic growth forecast to 3 per cent from 3.2 per cent.

Mr Trump agreed last week to delay a tariff hike on Chinese goods and said Beijing promised to buy up to 50 billion of American farm goods. Officials say the two sides still are working out details.

A bigger impact on Chinese growth appears to come from cooling domestic activity including consumer spending and investment.

Retail sales growth declined to 8.2 per cent over a year earlier in the first three quarters of 2019, down from the first half’s 8.4 per cent, the National Bureau of Statistics reported.

Auto sales in China, the global industry’s biggest market, are off 11.7 per cent for the first nine months of the year.

That is a setback for a marathon official campaign to nurture growth based on domestic consumption and reduce reliance on trade and investment. Those plans call for maintaining exports that support millions of jobs.

China’s exports to the US, its biggest foreign market, fell 21.9 per cent in September from a year ago. That helped to drag down overall Chinese exports by 1.4 per cent. Imports of American goods sank 15.7 per cent.

Beijing is struggling to cool consumer inflation that has spiked due to an outbreak of African swine fever that has disrupted supplies of pork, China’s staple meat.

Consumer prices rose 3 per cent in September, the ruling Communist Party’s official target for the year, as pork prices soared 69.3 per cent over a year earlier.

African swine fever has killed or prompted authorities to destroy millions of pigs.

Beijing has increased imports, released pork from stockpiles and promised aid to farmers. But researchers say shortages are likely to last through next year while farmers rebuild their herds. – Associated Press