China factory output in May beats forecasts at 6.5% 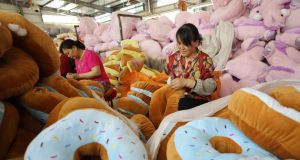 Women making toys for export at a factory in Ganyu in China’s eastern Jiangsu province. The central government is working to shift China’s economic model away from over-reliance on exports and investment. Photograph: AFP

Output from China’s factory gates combined with strong retail sales in May paint a sunny picture of the world’s second largest economy, but a cooling property market and slowing investment could soon start to drag on growth.

Any slowdown in economic expansion is likely to be gradual, with the government pulling out all the stops to present a positive picture ahead of a key Communist Party congress in the autumn, at which President Xi Jinping will reshuffle the leadership to cement his authority.

Industrial production is the broadest measure for economic growth, and is a useful proxy for gauging expansion. It rose by 6.5 per cent in May from a year earlier, according to data from the National Bureau of Statistics.

That is slightly higher than consensus for a 6.3 per cent increase in a Reuters’ poll of analysts, and is in line with April’s increase, though much lower than March’s high of 7.6 per cent.

The economy has been performing strongly on the back of government spending on infrastructure projects, but the May data showed that investment in property and the construction sector saw much slower growth rates after a raft of government cooling measures in recent months.

The central government is working to shift China’s economic model away from over-reliance on exports and investment onto expansion driven by consumer spending, innovation and services.

Against this background, state media has emphasised the strong increase in retail sales, which increased 10.7 per cent in May, driven by the strong growth in online sales.

This week saw orders for China’s first homegrown large passenger jet, the C919, reach 600 aircraft after China Everbright Financial Leasing signed up to book 30 of the jets from the manufacturer Commercial Aircraft Corporation of China.

So far a total of 24 foreign and domestic customers, including China’s national carrier Air China, have placed orders for the aircraft.

C919 completed its maiden test flight in May, making China the fourth jumbo jet producer after the United States, western Europe and Russia.

There have been concerns about a property bubble on the back of skyrocketing housing prices, especially in major cities, although since then local governments have tried to cool the market by expanding restrictions on house purchases and increased the minimum downpayment required for a mortgage.

Liquidity conditions have also been tightened, along with greater pressure on banks to tighten loan application reviews, rein in mortgage loans and lift mortgage interest rates.