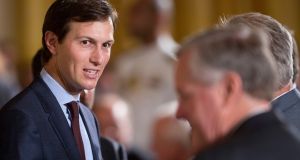 One of China’s most famous billionaires Wu Xiaohui, who has links to Donald Trump’s son-in-law Jared Kushner and is chairman of the insurer Anbang that owns New York City’s Waldorf Astoria hotel, has reportedly been detained by authorities on suspicion of financial irregularities.

Anbang said in a statement that Mr Wu was “unable to perform his duties . . . for personal reasons”.

The financial magazine Caijing reported that officials from the China Insurance Regulatory Commission (CIRC) informed a small group of employees of Anbang at a meeting on the company headquarters on Saturday that Mr Wu (50) had been detained.

Mr Wu’s last public appearance was on May 15th, when he attended a reception at the Belgian ambassador’s residence in Beijing. He founded the company in 2004 and built it into one of China’s biggest insurance companies, managing assets worth 1.65 trillion yuan (€216 billion) including the landmark New York hotel.

Anbang has more than 30,000 employees and 35 million clients.

The company has bought numerous high-profile companies and stakeholdings in recent months, but there have been growing questions about how it is funding the purchases, including speculation in the media that it was using payments from policyholders to fund its spending spree, accusations the company denied.

Anbang denied rumours circulating for weeks that Mr Wu had been stopped from travelling abroad.

Mr Wu had recently been in talks with a real-estate company owned by Mr Kushner, who is Mr Trump’s senior White House adviser as well as his daughter Ivanka’s husband. Mr Wu and Mr Kushner were negotiating a deal to redevelop one of Kushner Companies’ Manhattan buildings. Talks ended in March.

Earlier this year, Xiao Jianhua, a Canadian-Chinese financier with links to Mr Xi’s family, was reportedly abducted from his luxury apartment at the Four Seasons in Hong Kong. One of China’s richest men with wealth of about 40 billion yuan (€5.25 billion), Mr Xiao was taken to Beijing to assist investigators with a corruption inquiry, and has not been heard from since.

Xiang Junbo, the CIRC chairman, was sacked in April and put under investigation by the Communist Party’s anti-corruption watchdog.

Anbang has been in a long-running feud with the news site Caixin and its owner Hu Shuli – who was the original founder of the magazine Caijing which published the news of Mr Wu’s detention.

Caixin has described the insurer’s shareholding structures being like a “maze” and accused it of irregular financial practices.

1 PTSB plays down Ulster Bank talk as it sells €1.4bn of loans
2 Irish tech company Asavie acquired by Nasdaq-listed Akamai
3 Up or down – how much is your Local Property Tax this year?
4 Housing crisis will be permanent unless there is radical rethink, industry warns
5 Am I crazy to consider switching to an Ulster Bank mortgage?
6 How much state pension will I get next year?
7 Disposable income in Ireland rose 28% between 2012 and 2019
8 Ghost newspapers and zombie brands are stalking the media
9 CRH sells Brazilian cement business for $218m
10 Pandemic halves the value of venture capital deals in third quarter
Real news has value SUBSCRIBE