Cantillon: support for tax on emissions from agriculture an unwise move in Brexit climate 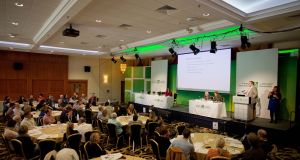 The Citizens Assembly: giving extra influence to 99 randomly chosen people actually attacks the basic principles of democracy as it gives them more of a say over legislation than all other citizens. Photograph: Tom Honan

The Paradise Papers revelations meant that there was a lot of talk about tax in the media this week. As a result, plenty of people overlooked one very significant story on the same subject: the Citizens’ Assembly vote in favour of taxing greenhouse gas emissions from agriculture.

Agriculture and food account for around 20 per cent of the Republic’s economy. In short, they account for €1 out out of every €5 generated in the State. Farmers produce something vital to everyone: food.

Farmers should pay their fair share of tax. However, applying an extra levy on a key part of the economy – one that provides something vital and which faces a particular challenge from Brexit – is not especially wise.

While the assembly voting in favour of such a tax does not mean that farmers will end up paying it, the body reports its recommendations to the Oireachtas, something which surely gives its findings extra traction with those who make our laws.

Giving this Government-mandated extra influence to 99 randomly chosen people actually attacks the basic principle of one person, one vote, as it gives them more of a say over legislation and legislators than all other citizens.

Giving them extra influence over tax legislation is especially insidious. Democratic governments can only levy taxes strictly in accordance with laws passed by properly constituted parliaments.

The idea of this constraint is to stop governments helping themselves to excessive amounts of citizens’ money and to try and ensure that they only take a reasonable amount from everyone. This may not always work in practice, but it is at least underpinned by the idea that governments can’t ride roughshod over people’s property rights.

The Citizens’ Assembly is subject to no such constraints. So it can cheerfully nominate any group that it wants for extra taxation, without giving any thought to their rights, or the broader consequences of such an action for those 4.5 million or so citizens who have no say in its deliberations.