Report on world’s money shows number of millionaires up 22%, impacted by Trump and Brexit 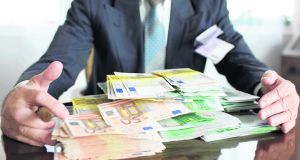 The world’s richest people have seen their share of total wealth increase from 42.5% at the height of crash to 50.1%.

Millennials were the big losers this year as the planet’s richest 1 per cent increased their share of the world’s wealth to more than half.

According to the Credit Suisse Research Institute’s 2017 Global Wealth Report, by 2022, the global number of millionaires is projected to rise by 22 per cent, from 36 million today to 44 million.

In terms of ultra-high net worth individuals, emerging economies accounted for 6 per cent of the segment in 2000, but have claimed 22 per cent of the growth (24,500 adults) since then. China alone added an estimated 17,700 adults, or 15 per cent of the total.

The report records an upsurge in the number of Forbes billionaires below the age of 30. Despite this, the data point to a “millennial disadvantage” due to tighter mortgage rules, growing house prices, increased income inequality and lower income mobility.

The report said the “difficult start and adverse market conditions” experienced in their early adult years will “most likely limit” their wealth acquiring prospects.

The generation was not only hit by capital losses from the global financial crisis, but faced first-hand the subsequent unemployment, increased income inequality as well as higher property prices, tighter mortgage rules, and a considerable rise in student debt.

The overall global outlook for millennials, however, is that not only will they experience greater challenges in building their wealth in the future but will also continue to face greater wealth inequality than previous generations.

The US continued its unbroken spell of gains since the financial crisis, adding $8.5 trillion to the stock of global wealth, which is half of the wealth generated globally over the 12 months to mid-2017.

Comparing wealth gains across countries, the US was restored to its usual first place, with a gain five times the rise recorded by China ($1.7 trillion) in second place.

China’s wealth is estimated at around $93.6 trillion, equivalent to 33 per cent of total global wealth. The US contributes the highest number of members of the top 1 per cent global wealth group, and currently accounts for 43 per cent of the world’s millionaires.

“Though the ongoing supportive role played by the Federal Reserve has undoubtedly played a part here as well, and wealth inequality remains a prominent issue,” he added.

Stability in Europe enabled wealth growth of 6.4 per cent across the continent. Germany, France, Italy, Spain made it to the top ten with the biggest gains in absolute terms.

The UK market recovered after losses caused by the Brexit vote last year but the outlook “remains uncertain”. Wealth per adult rose 2 per cent when valued in sterling, although it fell 1 per cent in US dollars.

Due to Brexit and the expected depreciation of the British pound, the UK is projected to reduce its stock of wealth by 0.9 per cent in the next five years, when expressed in US dollars.

Ten years from the onset of the global financial crisis, global wealth has grown by 27 per cent, according to the report.

However, it has been the world’s richest people who have seen their share of total wealth increase from 42.5 per cent at the height of crash to 50.1 per cent in 2017, or $140 trillion.

In the 12 months to mid-2017, global wealth grew at a faster pace than in recent years, with mean wealth per adult reaching a new record high. Switzerland is still the global leader in terms of wealth per adult.

This reflects widespread gains in equity markets matched by similar rises in non-financial assets, which moved above the pre-crisis year 2007’s level for the first time this year.

The report notes that the world’s 36 million millionaires comprise less than 1 per cent of the adult population, but own 46 per cent of household wealth. There has been an upsurge in the number of Forbes billionaires below the age of 30.

Since 2000, the number of millionaires globally has increased by 170 per cent, while the number of ultra-high net worth individuals has risen five-fold, making them by far the fastest-growing group of wealth holders.

By 2022, the global number of millionaires is projected to rise by 22 per cent, from 36 million today to 44 million. While the number of ultra-high net worth individuals will likely increase by 45,000 to reach 193,000 individuals.