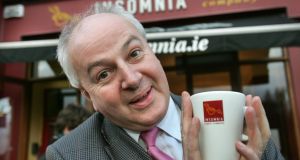 Anyone who drinks take-out coffee regularly can hardly be unaware of the colossal waste involved.

Millions of throwaway cups find their way into landfill every year in Ireland – and that’s before the waste generated from lids, trays, stirrers, sugar sachets and other needless paraphernalia are considered.

It’s an extravagance the country, which already has a serious problem with waste, can ill afford. But is a 15 cent levy on throwaway cups the answer?

Advocates argue it will trigger a culture change, encouraging people to adopt reusable cups, similar to how the plastic bag levy worked.

However, opponents like Insomnia’s Bobby Kerr believe the levy won’t change consumer behaviour and that his customers will simply opt to pay the higher price.

Insomnia currently offers reusable “keep cups” for just under €10, encouraging customers to buy them with free coffees and extra loyalty points, but barely 2 per cent of customers use them, he says.

“There’s never going to be a huge market for the reusable cup. There are difficulties with them, you’ve got to keep them clean and if you leave them in your car they can stink of milk,” Kerr says.

The coffee cup problem stems from the design of the cups, which are lined with polyethylene to prevent the paper going soggy. This makes recycling difficult and costly as it requires specialist processing to separate the plastic lining.

Kerr believes that while there is an onus on the coffee chains to change the culture around cup use there is also an obligation on recycling companies to deal more sustainably with the waste.

Insomnia is currently looking at a leaf cup, which would allow consumers separate the plastic lining and recycle both parts, and Kerr believes the Government should be incentivising coffee chains to go in this direction rather than taxing the consumer.

While the levy proposal might drum up revenue for the Government, he’s adamant it won’t shift the mountain of coffee cups ending up in landfill each year.