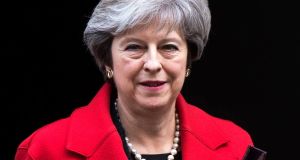 British prime minister Theresa May: sterling could be in for a volatile couple of weeks unless the Brexit talks go smoothly. Photograph: Will Oliver/EPA

The Brexit threat is slowly starting to feel real for Irish business, with the latest dip in sterling a reminder of the nervousness and volatility that lies ahead. As Theresa May’s domestic political problems grow and the Brexit mire deepens, sterling is looking vulnerable.

Against the euro, the UK currency was back around 89p on Monday as markets struggled with the political uncertainty in London and what it might mean.

Sterling is likely to ebb and flow along with the fortunes of May’s government and the risk of no agreement on progressing the talks at the December summit.

If there is a failure at the December summit to give the green light to trade talks, then fears of Britain crashing out without a deal will rise and sterling could suffer.

Previous research from IBEC, the employers’ body, indicated that Irish companies start to feel the pinch when the UK currency reaches around 85p and that the pips really start to squeak around 90p and higher. Apart from a brief period in August, sterling has held under 90p over the past year.

Now exporters, the tourism sector and retailers – the latter at risk from cross-Border shopping – will again be concerned that the UK currency looks vulnerable.

A key reason for its vulnerability is the threat of a talks breakdown ahead of the mid-December EU summit. Notable, so, that IBEC chief executive, Danny McCoy, speaking after a meeting in Number 10 Downing Street yesterday with Theresa May and Brexit minister David Davis, highlighted the importance of the so-called east-west trading relationship between Ireland and Britain and the necessity to do a trade deal.

This will have been aimed at much at Irish government buildings as at the Conservatives. Irish business want the North-South Border issue sorted, but not at the expense of ignoring a new trade deal.

Trade between Britain and Ireland is, after all, a multiple of that crossing the Border. And both are affected by trends in sterling, where a volatile ride could lie ahead in the next couple of weeks, unless the Brexit talks go smoothly. And, let’s face it, what are the chances of that?