Unemployment in North at nine-year low 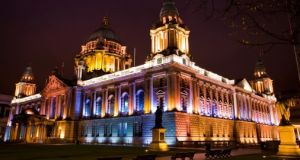 The City Hall in Belfast. Total unemployment fell in the North by 12,000 people over the quarter to an estimated 35,000. Photograph: iStock

The unemployment rate in the North has fallen to a nine-year low, but the proportion of “economically inactive” people has risen sharply.

The North’s unemployment rate in the three months to September fell to 4 per cent bringing it under the UK average rate of 4.3 per cent for the first time since 2013 and comfortably below the average EU rate of 7.6 per cent.

Total unemployment fell in the North by 12,000 people over the quarter to an estimated 35,000.

But the latest government data also highlights a big jump in the number of people registered as economically inactive - neither in work or unemployed such as students and carers. This increased to 28.9 per cent, the highest in the UK. The Northern Ireland long-term unemployment was also twice the UK average.

The latest labour market research also shows a drop of 100 in the number of people claiming jobless-related benefits last month to 29,300, or 3.2 per cent of the workforce.