Housing policy under fresh scrutiny as home-building stalls in Dublin 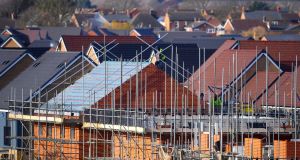 The report noted that building commencement notices, a strong indicator of future supply, fell by 18.5 per cent during the three month period. Photograph: PA

The Government’s housing strategy is under renewed pressure in the wake of a report showing housebuilding in Dublin stalled in the second quarter of this year, despite a severe shortage of properties to rent or buy.

The latest Dublin Economic Monitor, compiled on behalf of the city’s four local authorities, showed housing completions in the capital fell by nearly 14 per cent to 1,628 during the three-month period. It was the first fall since 2015 and comes amid a sharp slowdown in the market, which has seen property price inflation nationally drop to just 2 per cent.

The report also noted that building commencement notices, a strong indicator of future supply, fell by 18.5 per cent during the period. “This may have negative implications in the future for completions growth,” it said.

Goodbody chief economist Dermot O’Leary linked the fall-off in supply to the Central Bank’s stricter mortgage rules, which he said were impacting affordability.

“There has been an increase in unsold stock over the past 12-18 months, led by Dublin,” he said.

As a result some builders are finding it difficult to get funding for additional building until those unsold inventories are reduced, Mr O’Leary said.

However, estate agents Savills director of research, John McCartney, took a different view, suggesting the fall-off in completions reflected a pause in commencements prior to a changing of the building regulations in March 2018, which is now washing through the system.

Housing completions nationally rose by 25 per cent to 18,072 last year and are expected to be up again this year. However, they are still expected to lag demand in the economy, which is estimated at 30,000 units annually.

The report also indicated that average monthly rents in Dublin rose by 7.1 per cent to €1,713 in the second quarter, which was the highest level recorded since the series began in mid-2007.

The Department of Housing insisted that activity in the construction sector remained healthy and that housing supply was increasing.

“The current trends in housing market indicators continue to point to the stabilisation of the housing market with house price growth slowing, housing completions steadily increasing and with planning permissions and commencement notices figures showing a steady increase,” a spokesman said.

He also warned against extrapolating a trend from a given month or quarter.

Fianna Fáil’s housing spokesman Darragh O’Brien said recent uncertainty over the future of the Government’s Help to Buy scheme, which offers first-time buyers tax rebates of up to €20,000, had impacted the building figures.

The uncertainty emerged over the summer, he said, although it has now been decided to extend the scheme until 2021.

He said there is a “serious affordability issue in Dublin for first time buyers” and called on the Central Bank to increase the number of exemptions it can grant applicants every year.

“Mr O'Brien said he is not in favour of relaxing the overall Central Bank lending rules, but said a percentage of those exemptions should be ring fenced for first-time buyers. He called on banks to take into account a buyers rental payment history when considering a mortgage application."

Sinn Féin’s housing spokesman Eoin Ó Broin said he did not accept that home completions were down because of Central Bank lending rules.

“Letting people have access to unsustainable credit got us into huge difficulty in the boom and we shouldn’t repeat it.”

“The biggest inflation in relation to house prices at the moment is land. There is a huge amount of speculative activity going on, in particular in the city centre. Land is our problem and in the short to medium term it is for the State to start building large volumes of affordable homes. They need to be sold for €180,000 to €250,000.”