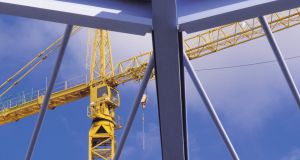 The Construction Industry Federation has said the sector could not afford any further increases in labour costs.

The construction industry has rejected demands from its workers for a 12 per cent pay increase over three years, pointing to the dangers Brexit will pose for the sector, as well as the risk that pay rises would push up house prices.

Siptu sector organiser John Regan confirmed on Monday that the union’s members are pursuing the increase as part of a process in establishing a new framework covering rates of pay, sick pay, and pensions across the sector.

Other improvements being sought include a one-hour daily travelling allowance for every worker.

“This claim is in line with other growing and profitable sectors in our economy,” said Mr Regan. “At a time of huge profits in the sector our members justifiably feel that they deserve their share in the substantial gains being made by employers.

“Instead, what we are seeing are attempts by employers to cap the entry level wage for construction workers at €28,000. This is unacceptable. There must be progress on wages if the construction industry is to keep up with demand.”

In its submission to the Workplace Relations Commission, the Construction Industry Federation said the sector could not afford any further increases in labour costs.

“An increase in labour costs would add to the cost of construction for a house builder,” it said.

“This in turn would result in an increase in the cost of the house to the purchaser. Driving up the cost of housing at this time would only serve to exacerbate the current housing crisis.”

Furthermore, the submission highlighted Brexit and said the industry was heavily reliant on the UK for both the import of materials and the export of services.

“There will be significant cost implications for construction should the UK follow a disorderly Brexit,” it said. “The construction sector could see a decline in output of five percentage points from its baseline following a disorderly/no-deal Brexit scenario.”

The submission rejected the call for pay increases, and claimed “no other sector of the economy is obliged to pay a travelling allowance”.

In addition, contributions towards pensions, sick pay and death-in-service “should remain unchanged”. Provision should, however, be made to provide for daily contributions, it said.