Phil Hogan: UK still has to come to terms with negotiating mandate 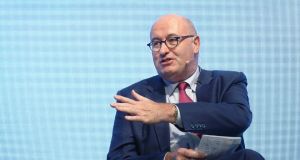 Phil Hogan: It beggars belief to see the inconsistency from the UK side

European Commissioner for Agriculture Phil Hogan has hit out at the United Kingdom’s inconsistency and lack of co-ordination in Brexit negotiations.

Mr Hogan’s comments come after Taoiseach Leo Varadkar on Friday said Ireland was “not going to design a Border for the Brexiteers” which was seen as the most significant difference yet between Ireland and the UK over Britain’s exit from the European Union.

“It seems the United Kingdom still have to come to terms with their negotiating mandate”, Mr Hogan said during an interview with RTÉ Radio One’s Countrywide programme. “This is happening at a time when the clock is ticking.

“It’s four months since Article 50 was triggered, we have about a year or a little more than a year to go because it has to be approved ... by the parliament and by the council of ministers by March 2019.

“It beggars belief to see the type of inconsistency and lack of co-ordination that we see at the moment from the UK side,” Mr Hogan added.

The EU’s chief Brexit negotiator Michel Barnier this week fired a diplomatic shot across the bow of his UK counterparts by warning that the pace of talks may not be sufficient to reach a critical milestone in October. Reporting to EU 27 ambassadors on the second round of talks last week, Mr Barnier suggested it may be necessary to move to more frequent than monthly negotiating rounds if the crucial benchmark of “sufficient progress” is to be met which will allow the opening of talks on the future EU-UK relationship, specifically trade.

The heads of government of the 27 will decide whether the yardstick has been met. Mr Barnier’s concern at what he sees as a lack of preparedness on the UK side is widely shared - an Irish diplomatic source expressed concern about whether an agreement on the phase one “divorce” issues could be reached in time for the October summit.