China cranks up trade war with extra tariffs on US goods

Beijing raising tariffs on pork, aluminium scrap and some other products by 25% 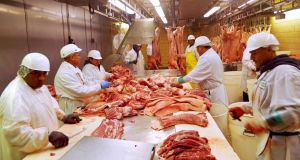 Workers cut pork at Park Packing in Chicago, Illinois: China slapped extra tariffs of up to 25 per cent on US frozen pork. Photograph: Reuters

As fears of a trade war between the world’s two biggest economies intensified, China slapped extra tariffs of up to 25 per cent on US frozen pork, wine, fruits and nuts, in response to US duties on imports of aluminium and steel.

The customs tariff commission of the State Council, which is headed by former finance minister Xiao Jie, raised tariffs on pork, aluminium scrap and some other products by 25 per cent, the ministry said.

A 15 per cent tariff was imposed on apples, almonds and some other goods.

While US president Donald Trump and China’s president Xi Jinping appear to have a reasonably close relationship on geopolitical issues such as the North Korean nuclear crisis, they remain far apart on trade matters such as China’s multi-billion dollar trade surplus with the US and access for US firms to China’s burgeoning economy.

China’s major trading partners, including the European Union, have long complained about policies that hamper market access. And despite repeated promises to the contrary, foreign firms continue to complain of unfair treatment.

China’s finance ministry indicated it was responding to a US tariff hike on steel and aluminium that took effect on March 2nd but the backdrop seems to be Mr Trump’s bid to impose higher duties on $50 billion (€41 billion) of Chinese goods.

“Our country advocates and supports the multilateral trading system,” ran the statement from the finance ministry.

“China’s suspension of its tariff concessions is a legitimate action adopted under WTO rules to safeguard China’s interests,” the statement said.

The tariff raises have been accompanied by ever-sharper rhetoric.

“American politicians better realise sooner rather than later that China would never submit if the US launched a trade war,” said the Global Times, a newspaper published by the ruling Communist Party.

“It is time for Washington to bid farewell to the fantasy it has long been living in, a delusional world of make-believe whereby it imagines China as an unresponsive nation and tolerant toward US tariffs,” ran the editorial.

“China is not expecting added damage to US relations, but China does have the confidence and courage to confront any and all future difficulties and challenges should they emerge,” the paper said in an editorial.

The Chinese have warned against opening “a Pandora’s Box” and letting loose a flurry of protectionist practices across the globe.