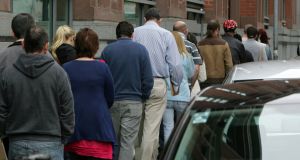 The seasonally adjusted unemployment rate for March was down almost one percentage point compared with the same period last year, the latest figures from the Central Statistics Office show.

The rate for last month was 6.1 per cent, unchanged from the revised rate in February, but down from 7 per cent in March 2017.

Conall MacCoille, an economist with Davy, said the unemployment rate is likely to fall below 6 per cent in the coming months on the back of recent manufacturing PMI surveys, which point to continued strong hiring.

At Merrion Stockbrokers, economist Alan McQuaid noted the rate was nearly a 10 percentage point improvement on the peak unemployment rate of 15.9 per cent in December 2011 during the financial crisis. It is almost two-and-a-half points below the current euro zone average of 8.5 per cent.

“Although emigration has been a factor to some degree in keeping unemployment down since the financial crisis, the labour market has improved dramatically over the past few years, reflecting the strengthening of the economic recovery,” Mr McQuaid said.

“The Government needs to put particular focus on getting this rate down into single digits as quickly as possible,” he said. “However, the problem is that a lot of these people need upskilling or retraining into areas where work is available, and that won’t happen overnight.”

The unemployment rate for women in March was 5.6 per cent, down from 5.7 per cent in February and down from 6.6 per cent on the same period last year.

The unemployment rate for people aged 15-24 years was 12.5 per cent in March, a decrease from 12.7 per cent in February.