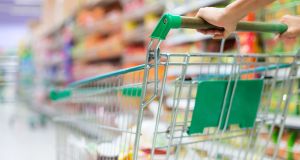 The price of everyday food items could rise by up to 45 per cent in the event of a no-deal Brexit, industry leaders warned. Photograph: iStock

A week feels like a year as we edge into the final stages of our pre-Brexit holding pattern. Last week, Britain’s decision to leave the European Union was promising a boon for the Irish financial services sector while this week the picture is altogether bleaker, albeit for an entirely different part of the economy.

The food sector was firmly in the spotlight after a series of announcements as to how things would change in the event of a no-deal Brexit. Across Ireland and Britain, the price of everyday food items could rise by up to 45 per cent, retail industry leaders on both sides of the Irish Sea warned.

Of course, we had an idea that this would be the case, particularly given retailers and other goods producers have ramped up the extent of their commentary.

This week, as a shrewd letter writer to The Irish Times noted, Birds Eye gave the two (fish) fingers to the UK’s political establishment when its UK and Ireland boss said the German-manufactured products would cost an additional 20 per cent if World Trade Organisation (WTO) tariffs are introduced.

Subsequently, UK environment secretary Michael Gove confirmed that a zero-tariff regime after the UK departs is not on the table in the event of a no-deal Brexit. That confirmation “demonstrates the gravity of the situation for the Irish farming sector”, their representative body said, calling for a plan for “comprehensive market supports”. Lest you need reminding, the UK is the Republic’s largest and most lucrative trading partner for agri-food, accounting for half of all beef exports.

Our own Kerry Group – with a €16 billion market value – has some reservations as the Brexit countdown continues. This week it signalled that it has begun stockpiling raw materials while some of its clients are building up to three months of stock.

Rival Glanbia reiterated that it too was stockpiling after releasing stellar results that led to a 13 per cent increase in its share price on Wednesday.

And while sectors clamber for support in Ireland, Brexit claimed casualties across the pond. Regional airline Flybmi collapsed last weekend citing Brexit difficulties in particular. This left Derry Airport without a key route to London Stansted although Scottish carrier Loganair looks set to fill the gap.

Honda announced plans to pull its Swindon manufacturing plant in 2021, with the loss of 3,500 jobs. Honda blamed the closure on “unprecedented” global changes and its chief executive said: “this decision is not related to Brexit.”

In any event, this is still a major blow to Britain’s automotive industry just weeks after Honda assured its UK workforce it would be “well placed to adjust to all possible outcomes” on Brexit. Given Nissan’s decision not to manufacture its X-Trail in the UK, this might not be the last we’ve heard from carmakers reviewing their British factories.

While bankers’ bonuses remain off the agenda, pay rises are returning for the rank and file. This week about 90 per cent of Bank of Ireland’s 10,500-strong workforce stood to benefit from a 3.1 per cent pay rise. However, staff in middle-management grades have been told they’ll only receive raises “on a discretionary basis”.

Goodbody estimates the slightly higher settlement than had been anticipated (some 2.75 per cent) would likely add about €9 million to the bank’s cost base unless the bank can make savings elsewhere.

Meanwhile, AIB staff agreed to a 3 per cent pay increase in a deal finalised last month although about 800 staff won’t benefit because they’re currently receiving salaries above the new grade band into which they are moving.

There was less good news for workers this week from a report by academics in University College Cork predicting that two out of every five jobs across Ireland are at high risk of automation.

With workers in the office, secretarial and administrative support positions in the firing line, coupled with banks globally using artificial intelligence to undertake a greater number of tasks, staff in the financial sector shouldn’t be complacent.

In the ever-evolving world of smartphones, with ownership reaching saturation point among western consumers, the battle is really only now heating up. Samsung this week unveiled a phone that harks back to one of Nokia’s later inventions when you could open you handset to reveal a keyboard and a screen.

Of course, this is an all-singing, all-dancing smartphone whereas Nokia’s brick most certainly wasn’t, but it nevertheless indicates the cyclical nature of consumer habits.

“It’s a smartphone, a tablet and a camera that fits in your pocket,” said Samsung Electronics’ Justin Denison at an event in San Francisco this week, noting that the Fold has a six-camera system. It would want to be at that price.