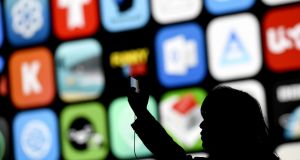 The State has paid over €4.5 million in legal fees to date on its challenge to overturn the European ruling. Photograph: David Paul Morris/Bloomberg

The management of the account set up to hold the €14 billion tax bill Apple has been ordered to pay the State by the European Commission, will cost about €1 million.

Earlier this year the London branch of Bank of New York Mellon was selected to oversee the escrow account into which the tech giant will transfer the funds , following the high-profile EU ruling on its historical Irish tax arrangements.

The contract will be worth €800,000 excluding VAT, according to documents recently published on the Government’s tendering website etenders.ie.

The financial firm will act as a custodian for the account, and will oversee the three investment firms – Goldman Sachs, Amundi and BlackRock – selected to handle the funds in the account. The New York firm was one of three that bid for the contract.

The third-party escrow account was set up to hold the funds, pending the outcome of separate appeals by the Government and Apple to have the commission’s ruling overturned.

In late April the legal agreement covering the account was signed between the State and Apple, and the following month the US multinational transferred the first €1.5 billion into the account.

Minister for Finance Paschal Donohoe has said he expects all the funds will be transferred into the account by the end of September and the payments would be made in significant tranches.

In 2016 the commission ruled that the iPhone maker’s past tax arrangements in Ireland amounted to illegal state aid, a charge the Government has rejected. The State has paid over €4.5 million in legal fees to date on its challenge to overturn the ruling at the General Court of the European Union.

Separately on Thursday, Apple said its iPhone and iPad apps were now supporting 17,000 Irish jobs, while the tech giant said it had spent more than €550 million with local companies in the past two years. Suppliers include Dublin-based Colorman, which prints Apple product documentation.

Apple, which has had a base in Cork for more than 35 years, now directly employs 6,000 staff in the State, with the team including more than 80 different nationalities.

Since 2012, the company has invested almost €220 million in the development of its Holyhill campus, having recently expanded with a new building that can accommodate 1,400 staff.