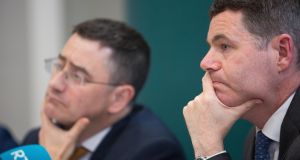 Paschal Donohoe, Minister for Finance and the Department of Finance Chief Economist, John McCarthy at the announcement of the Summer Economic Statement. Photograph: Tom Honan.

“What this is saying is that you’ve an economy that’s growing very strongly,” said Joe Tynan, head of tax at PwC. “The indication is that if we have money we’ll spend it in the country rather than reduce tax receipts,” he said.

Mr Tynan noted that while the short term prospects for the Irish economy are strong across most indicators, “clouds appear” in the medium term. “Three to four years out you’ve got Brexit, you’ve got trade...for such an open economy that’s a big impact.”

“There is clear logic in spending less when the economy is strong, but as Ireland was not able to make large investments during the lean years, there is a rather long to-do list. This may necessitate a little more pro-cyclical spending than the Government (or economists) would like,” he said.

“Given the expansion plans of a number of high profile companies, a failure to address this critical issue will jeopardise the very positive labour market developments which are expected to continue to be a driving force of our sustainable economic growth in the medium-term,” she said.

Retail Excellence deputy chief executive Lorraine Higgins noted that for retailers, although sales trends are on a marginal upward trajectory, “the long-held assertion at Budget time that improving consumer spend through increases in social welfare payments and tax bands is enough to take care of retail is no longer satisfactory given the unique challenges the industry faces.”

Dublin Chamber chief executive Mary Rose Burke said that while she accepts the need for prudent planning to prevent the economy from overheating, inadequate economic infrastructure and the emerging productivity gap between Irish and multinational companies are “two major concerns”.

“The Government must look to strengthen the three fundamentals of the economy, namely our infrastructure, our indigenous businesses and our labour force. Issues such as congestion, an unattractive tax regime for SMEs and entrepreneurs and labour market barriers need to be addressed.

That was a view shared by Chambers Ireland chief executive Ian Talbot, who said that fiscal prudency and delivering upon the commitments made in the National Development plan are what Irish business wants to see.

“Continued commitment to infrastructure spending and ensuring that Irish businesses are supported through the difficult Brexit transition period that lies ahead must be the priority for Budget 2019 and beyond.

“As the Statement itself outlines it is now the time to ‘fix the roof while the sun shines’ and ensure we are prepared for the challenges that we will face in the future.”