Running its Irish operation has cost Amazon an estimated €2.4 billion since 2011 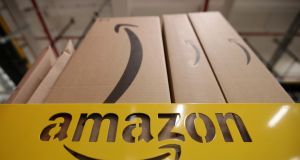 Online giant Amazon has spent an estimated €2 billion on its network of data centres in the Republic over the past decade.

That is according to economic consultants, Indecon, who added that running its operation here has cost the group an estimated €2.4 billion since 2011.

Findings from the Indecon report – commissioned by Amazon Web Services (AWS) – are contained in planning documentation lodged with Dublin City Council by Mullins Developments, which is looking to construct two two-storey data centre buildings for Amazon at Clonshaugh Business and Technology Park in Dublin 17.

The report also confirms that construction work commenced in the third quarter of 2019 on a data centre at Cruiserath, Dublin 15 and another in Co Meath in the second quarter of last year.

Dublin City Council has requested additional information on the Clonshaugh data centre plan and a final decision will be made later in the year.

The retail giant’s Irish plan comes as it has been forced to pay out $61.7 million (€51.3 million) to some of its US delivery drivers to settle allegations that the ecommerce giant had pocketed tips left by their customers.

The US Federal Trade Commission (FTC) said Amazon, whose revenues are expected to have exceeded $380 billion in 2020, withheld the amount over the course of two-and-a-half years, only stopping once it discovered it was under investigation.

The FTC said that according to Amazon’s advertising, its Flex drivers should “receive 100 per cent of the tips you earn”, in addition to a minimum of $18 to $25 in earnings per hour.

But beginning in 2016, the watchdog alleged, Amazon started using customer tips to make up the minimum earnings, without notifying workers of the change. The practice ended in 2019, the FTC said.

“Rather than passing along 100 per cent of customers’ tips to drivers, as it had promised to do, Amazon used the money itself,” said Daniel Kaufman, acting director of the FTC’s bureau of consumer protection, in a statement on Tuesday. – Additional reporting The Financial Times Limited 2021