By the end of this year, State will owe €47,700 for each individual 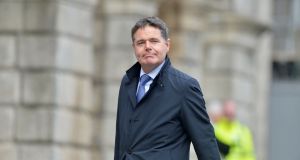 The Government finances can absorb a forecast 17 per cent spike in its debt level to a record €239 billion over two years to the end of 2021 as a result of “enormous” spending to contain the coronavirus shock, according to Minister for Finance Paschal Donohoe.

The increase will mean that €47,700 will be owed by the State to international creditors for every individual in the country by the end of this year, according to the Government’s latest annual report on public debt.

Government borrowing costs have dropped across Europe since the onset of the coronavirus crisis last March, driven by a special €1.85 trillion European Central Bank pandemic bond-buying programme, even as states have been forced to turn to international debt markets to deal with the healthcare and economic costs of the pandemic.

The National Treasury Management Agency (NTMA) borrowed €24 billion on the international bond markets last year at a record low average rate of 0.2 per cent, and is set to raise €16 billion-€20 billion in 2021 to deal with the fallout. An initial €5.5 billion of 10-year bonds sold earlier this month were priced to carry a negative market interest rate, or yield, of -0.257 per cent.

“The budgetary support that we are putting in place to support income and to support employers at a time of strain is truly extraordinary, and it’s needed,” Mr Donohoe told reporters during an online press conference on Thursday.

He said that the subsequent spike in debt – to 115 per cent of the size of the domestic economy, or what’s known as GNI*, by the end of this year from 96 per cent at the end of 2019 – has been an important shock absorber for the economy. “Without short-term fiscal support, the economic – and wider societal – upheaval would have been even more severe,” he said.

The pandemic has ushered in “a new period of rising public indebtedness” and the spectre of increased Government involvement in the economy. Ultimately, there will have to be a public debate about how much of the so-called big state should remain in place in the long run, and how that would be funded, he said.

Mr Donohoe reiterated that it would be important to put the debt-income ratio on a “downward trajectory, in order to reduce the vulnerability of both the Irish economy and the public finances to future shocks” once the pandemic has passed. A pathway towards eliminating the budget deficit “that balances the dual needs of supporting economic recovery and ensuring fiscal sustainability” will be published in April, he said.

Budget 2020 was framed last October on the basis that there would be no post-Brexit trade agreement between the UK and EU, and the assumption that there would be no broadly available Covid-19 vaccine. But an EU-UK trade agreement was reached on Christmas Eve and the rollout of a vaccination programme is currently in train, even if it will be the second half of the year before widespread inoculation is likely to be achieved.

On the downside, the State is currently in the middle of a third wave of the pandemic and heightened restrictions. Department of Finance chief economist John McCarthy said it was likely there would be a weaker-than-expected economic performance in the first quarter of this year, followed by a “faster” pick-up in the second half.

7 Everyday banking: Are we getting less but paying more?