Economy in cruise control but stormier skies ahead 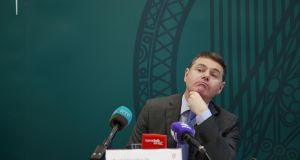 Minister for Finance Paschal Donohoe: he has plenty to ponder ahead of announcing Budget 2019 in October. Photograph: Nick Bradshaw

The Irish economy may resemble a Boeing 747 in cruise control these days, but there were warnings this week that the State is “relying on one big engine as we fly into much stormier skies”.

The National Competitiveness Council was talking about the economy’s reliance on a small number of major multinationals. A third of exports come from just five companies, it said, with the big players in the tech and pharma sectors responsible for huge amounts of economic activity.

This, it said, has the effect of disguising a large number of smaller firms where productivity was stagnant or falling, posing significant vulnerabilities and challenges to Government policy.

More concerns were expressed by the National Treasury Management Agency, which manages the national debt and State borrowing. It said our reliance on US investment leaves us open to shocks that might strike on the other side of the Atlantic.

It said it was “not easy to see” how the economy would adapt if trade tensions rose and hit exports from the Republic. Furthermore, the State was vulnerable to any US downturn, with every 1 per cent in US growth hitting us with a similar decline here.

That being said, a review from the Central Statistics Office showed the State’s financial sector has become a less important part of the economy since 2010, with its share down more than 3 per cent. However, the absolute size of the sector has increased since 2015.

Then there’s Brexit. The Central Bank of Ireland warned that should the UK leave the EU without a withdrawal agreement in March, the Irish economy would face the costs of the UK’s departure much earlier.

Nonetheless, the latest exchequer returns show the Government collected almost €29.7 billion in tax so far this year, up 5.5 per cent or €1.56 billion on the same period last year. Corporation tax remained the stellar performer, almost 41 per cent ahead of target.

So it’ll be a case of all eyes on Minister for Finance Paschal Donohoe when the Dáil sits again after the summer recess. Among the proposals for Budget 2019 this week was an increase in the income level at which earners become liable for the 40 per cent income tax rate.

There was also a paper from his officials suggesting scrapping the special 9 per cent VAT rate for tourism, which has cost €2.6 billion since its introduction in 2011. That didn’t stop the tourist industry asking for an extra €50 million in supports from October’s budget.

Permanent TSB this week pulled the trigger on the sale of its Project Glas portfolio, which includes 10,700 owner-occupied and buy-to-let mortgages in arrears. PTSB agreed to sell the loans to Start Mortgages, which is backed by US private equity group Lone Star.

The 75 per cent State-owned bank will get €1.3 billion in cash for the portfolio, which had a face value of €2.1 billion. About 7,400 of the loans involve private homes, while the rest are investment properties.

The deal will give the buyer the right to seek repayment of the debts or take control of the properties used to secure them, raising fears that some homeowners could face repossession proceedings.

Bank of Ireland could soon be following suit after it said tougher regulations could prompt it to sell €5.9 billion in mortgages and business loans that have fallen into arrears. This marks a U-turn in the bank’s position.

The bank’s chief executive, Francesca McDonagh, was speaking after the lender reported that pre-tax profits dipped to €454 million in the six months to June 30th from €460 million during the first half of last year.

Over at Ulster Bank, which is owned by Royal Bank of Scotland, profits jumped to €100 million during the first half of 2018, compared with just €12 million last year. That was driven by a net impairment release of €30 million and a €57 million reduction in operating expenses.

Meanwhile, in the credit union sector assets have reached a record high of €17.2 billion, according to a new report by the Central Bank. However, it cautioned that “many significant challenges” remained, including a deteriorating cost-to-income position.

It was a record-breaking week for US tech giant Apple as it became the first company to reach a trillion-dollar market capitalisation, beating old foes such as Microsoft and younger tech rivals Amazon and Alphabet to the magical milestone.

The landmark moment, when the company’s share price touched $207.05 in intraday trading on Thursday, came thanks to a combination of robust iPhone sales and a vast capital returns programme running into hundreds of billions of dollars.

It should have no problem then stumping up the remaining €5 billion it owes Irish taxpayers following the European Commission’s directive nearly two years ago that it owed the State €13 billion in back taxes.

Apple has paid over €9 billion – or almost two-thirds – of the sum, and €1 billion of interest it was ordered to transfer to the State, the company said in a regulatory filing late on Wednesday. It said €4.5 billion was paid since June 30th. For the record, Apple and the State are appealing the commission’s ruling, and the funds will be ringfenced until a final outcome is achieved.

This week also saw some stellar corporate results being posted. Profits at Irish real estate company Ires Reit more than doubled during the first half of 2018 compared with a year ago.

Ires Reit chief executive Margaret Sweeney noted the “severe shortage of accommodation” as a pressing issue for the company, and remarked that increased regulation was forcing many private landlords to exit the market.

Over at Aer Lingus profits soared to €104 million during the first half of the 2018, up from €53 million during the same period in 2017. The airline’s parent, International Airlines Group (IAG), recorded an operating profit of €1.2 billion.

Finally, Paddy Power Betfair’s new US subsidiary FanDuel Group has linked up with Boyd Gaming in a strategic partnership to deliver sport betting and online casino markets in the US.