The trillion dollar question: what does a trillion look like?

How much is a $1 trillion? Enough to buy every man, woman and child a house in Ireland 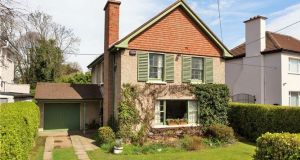 This property in Booterstown is on the market for €1 million - so a million of these would give you €1 trillion.

After its shares hit $207.05 earlier this week, Apple has become the first $1 trillion company in the world, having travelled back from the brink of near bankruptcy back in the 1990s .

But just how much is a trillion? An easy way of recognising it is that a trillion has 12 zeros, or another way of looking at it is it’s a million million. So, for example, the property in the picture with this article is worth €1 million - so with Apple’s valuation you could buy one of these properties for the one million poor or deprived people (according to the group Social Justice Ireland) in Ireland. Or you could buy a house worth about €220,000 for every man, woman and child living in the Republic of Ireland.

Another way of looking at it is that a trillion is a thousand billion. So Apple could have built a thousand of its planned $1 billion data centre in Athenry that it dropped earlier this year.

If you wanted to count all those trillion dollars you couldn’t, as it would take you 31,709 years, based on counting $60 a minute.

Looking to rob a bank of $1 trillion? Well you’re going to need a big truck or a fleet of them to take it all. Given that $1 million dollars weighs 10kg exactly, a billion weighs 10 tonnes, so a trillion will weigh 10,000 tonnes.

And you couldn’t quite get to the moon if you stood on a stack of dollar bills, but you almost could. Yes, it has been estimated that a $1 trillion worth of one dollar bills measures 109,220 kilometres, which is equivalent to more than one fourth the way from the earth to the moon.