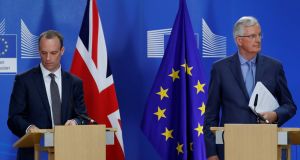 The British government this week insisted it was “by far” the most likely outcome that the United Kingdom will get a “good deal” before it leaves the European Union in March, but London has nonetheless stepped up its preparations for a disorderly Brexit.

The UK government published 25 technical notices outlining the impact of a no-deal Brexit on a number of sectors and economic activities, but Brexit secretary Dominic Raab was still bullish.

“I am still confident that getting a good deal is, by far, the most likely outcome,” he said. “The vast majority, roughly 80 per cent, of the withdrawal agreement has now been agreed, and we are making further progress on those outstanding separation issues.”

The technical notices warned that failure to reach a deal would make credit card transactions with the EU more expensive, and that British citizens living in the EU could lose access to their UK bank accounts or pensions without a side deal.

Trade with the bloc would revert to “non-preferential” World Trade Organisation terms, and exporters should think about engaging “the services of a customs broker”. Pharmaceutical companies were told to stockpile an extra six weeks’ supply of medicines.

The main threat to a withdrawal agreement remains the Border and the so-called backstop arrangement. A new proposal this week suggested checks on goods travelling from Britain to Northern Ireland would be carried out at British ports.

EU chief negotiator Michel Barnier said both sides needed to “de-dramatise” the backstop, which commits both to ensuring there is no hard border even if Britain leaves the bloc without a deal.

Elsewhere, there was some good news for the EU as Greece emerged from eight years of bailouts. Alexis Tsipras, the prime minister, hailed the end of a “modern-day Odyssey” from a hilltop overlooking a bay on the Ionian island of Ithaca. “This is a day of liberation,” he declared.

Across the Atlantic, meanwhile, the trade war between the United States and China escalated after the superpowers imposed 25 per cent tariffs on $16 billion (€14 billion) worth of each other’s goods.

Separately, Donald Trump said he was “not thrilled” with decisions by the Federal Reserve this year to raise interest rates. Trump has been vocal on the Fed’s monetary policy stance despite the central bank’s independence.

Fine Gael could be set to incur the wrath of its middle-class support base after it emerged this week that more than 120,000 workers across the State will be pushed into higher tax bands next January unless action is taken in October’s budget.

Revenue, perhaps forgetting Taoiseach Leo Varadkar’s penchant for those who “get up early in the morning”, separately said the Government could raise €433 million by introducing a 43 per cent income tax rate for workers earning €80,000 or more.

It didn’t end there either. The Department of Social Protection outlined a proposal to deduct 6 per cent of gross pay from more than 850,000 workers for an occupational pension from 2022.

Just 35 per cent of the private sector workforce have private pensions’ coverage. The proposal would mean PAYE workers between the ages of 23 and 60 earning more than €20,000 would be automatically enrolled.

While people are seemingly reluctant to plan for their retirement, they are apparently being far more responsible when it comes to how they currently spend their money, as Central Bank figures showed most are opting to pay with debit, rather than credit cards.

The regulator said there was significant growth in debit card expenditure across all sectors in June, and particularly retail, where spending rose by 18 per cent or €253 million compared with June 2017.

Meanwhile, figures obtained from Revenue by Sinn Féin’s Pearse Doherty showed the top 10,000 earners in the Republic took home €5.6 billion in income in 2016, which he said means that, on average, 10,000 people took home more than half a million each.

That may have something to do with the fact that the bosses of the Republic’s top 20 companies earned, on average, 33 times more than their staff and secured pay increases twice as large as their employees, according to research by The Irish Times.

The race to meet the demand for housing is hotting up after figures from the Central Statistics Office showed a year-on-year increase of 30 per cent in the number of new builds during the first half of the year.

The figure of more than 7,900 new homes was however woefully short of the estimated level of demand in the market, which is put at 30,000-35,000 annually. The majority of new homes were in Dublin and the mideast, where demand is strongest.

Indeed, another block of apartments under construction in the Dublin docklands is to be offered for sale by private treaty. Selling agents Savills and Owen Reilly are quoting a guide price of €52.5 million for 72 homes at Sir John Rogerson’s Quay.

Meanwhile, shareholders in Irish real estate group Ires Reit, the State’s largest private landlord, are in line for a “material expansion” in dividends. That’s according to stockbroker Investec which pointed to portfolio additions and rent inflation.

As property prices soar once again, the company is seeking finance to re-enter the market with its signature product: equity-release home loans to elderly people whose debts are later repaid from their estates after they die.