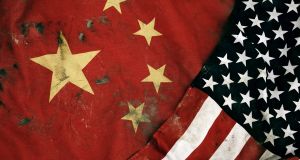 At the end of the trade negotiations on Thursday evening in Washington, Lindsay Walters, the White House deputy press secretary, said the two sides had “exchanged views on how to achieve fairness, balance and reciprocity in the economic relationship” but gave no indication that any serious progress had been made.

US and Chinese officials have ended two days of talks aimed at easing trade tensions without a clear breakthrough, ensuring the commercial dispute between Washington and Beijing that is roiling the global economy will rumble on.

At the end of the negotiations on Thursday evening in Washington, Lindsay Walters, the White House deputy press secretary, said the two sides had “exchanged views on how to achieve fairness, balance and reciprocity in the economic relationship” but gave no indication that any serious progress had been made.

Her remarks came shortly after separate discussions between the US and Mexico to renegotiate the North American Free Trade Agreement also failed to produce a deal. But the Nafta talks were extended into the weekend, raising the prospect that significant advances could still be made.

There were low expectations surrounding the negotiations with Beijing, but the talks marked the first timid attempt to patch up differences on trade between the US and China since June, when economic relations between the two countries soured, leading to an escalation of the tariff battle.

Even as the officials met at the Treasury department, $16 billion (€14 billion) in new tariffs on Chinese imports were enacted by the Trump administration – a move that was immediately matched by Beijing with retaliatory measures of the same scale.

“We have said consistently since the beginning of the administration that we are open to talking to China about the problems that we have had with their trade practices, with their industrial subsidies, and with a whole range of state-led intervention in the economy that is affecting global markets,” one senior Trump administration official said on Thursday morning.

“But in order to get a positive result out of these engagements, it’s really critical that they address the fundamental concerns that we have raised. We haven’t seen that yet,” the official added.

According to sources, Chinese officials have been willing to offer some market-opening measures to the US and increased purchases of energy and agricultural products – as well as assurances that there would be no major renminbi weakening. But this is still a far cry from a sweeping list of concessions presented by Trump officials in May, which had been widely dismissed as unrealistic.

“The Chinese have made attempts and they keep making them, but they keep getting rejected. I don’t think this White House has put together a set of coherent demands that the Chinese could conceivably meet,” said Phil Levy, senior fellow on the global economy at the Chicago Council on Global Affairs.

Eswar Prasad, a professor of trade policy at Cornell University, said the trade dispute had become a “very complicated game of chicken”, adding: “The Chinese see an opening to restart negotiations but the difficulty they face is an inflexible and unpredictable US trade policy.”

One business lobbyist familiar with the negotiations said that although progress was limited, the talks might have served to narrow differences between the two countries and pave the way for higher-level negotiations later this year.

For the time being, however, the US has already imposed $50bn in tariffs on Chinese imports - including the $16 billion enforced on Thursday - and threatened to follow up with levies on a further $200 billion of products if there is no deal forthcoming.

As the talks with China unfolded in one federal building, senior Mexican officials at the US trade representatives offices attempted to renegotiate Nafta, which has stalled for months and inflamed economic tensions between the two countries ever since Donald Trump’s election.

In recent weeks, with Canada on the sidelines, Mexican and US officials have been trying to forge a consensus on issues such as the treatment of Mexican car exports to the US, which Mr Trump has been trying to restrict.

“This is reaching the end. It’s very difficult [to get into details], because as I’ve said, until we’ve closed everything, we’re not there yet,” Ildefonso Guajardo, Mexico’s economy minister, said on Thursday. “What am I preparing for with my team? I’m preparing to send all my shirts to the dry cleaners,” he added.

If the US and Mexico reach a deal on their most pressing sticking points, Canada is expected to rejoin the talks in an effort to reach a final deal among all three countries. But there could still be major hurdles in the last stretch, such as whether the US will continue to insist on a five-year “sunset” clause that would force a periodic re-examination of the new Nafta and leave a cloud of uncertainty hanging over the treaty.