Investments in construction and state spending both rose 0.6 % quarter on quarter 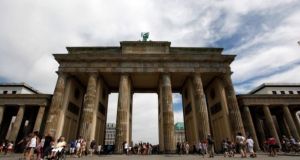 A larger scale trade row between the United States and China could also harm Germany, many of whose manufacturers rely on growth in the world’s two largest economies.

All sectors of the German economy grew in the second quarter, data showed, with robust domestic activity helping to cushion against risks to exports from an uncertain global trade outlook.

Investments in construction and state spending expanded the most, both up 0.6 per cent quarter on quarter, and private consumption extended its growth run to six straight quarters.

Berlin has been criticised by its euro zone partners for not helping their economies by spending more of its budget surplus on investments.

“Defying the often-heard international criticism, the economy is already showing a very balanced growth model,” he wrote in a note to clients. It had delivered “a full strike”, with all sectors growing.

Germany’s economy has traditionally been dominated by exports. That sector’s prominence has declined in recent quarters, and trade disputes between the United States and many of its largest commercial partners, including the European Union, risk diminishing its influence further.

Stefan Kipar of BayernLB said he saw no signs of that yet, however.

“It’s encouraging to see that investments did not decline. And we don’t see an export weakness,” he wrote in a note to clients.

US president Donald Trump, who has imposed tariffs on steel and aluminium imports from the EU, agreed last month to defer imposing levies on cars imported from the bloc while the two sides negotiate over other trade issues.

A larger scale trade row between the United States and China could also harm Germany, many of whose manufacturers rely on growth in the world’s two largest economies.

Further clouding the outlook for Germany are US sanctions on smaller trade partners Turkey and Russia, and the risk of Britain leaving the EU next year without a negotiated deal.

“Many potential risks (lie) ahead but at least for now, there is only one good reaction to today’s growth data: enjoy and savour,” ING Diba’s Brzeski said.