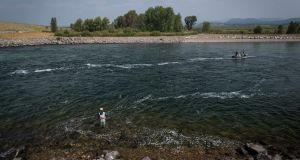 Both Mario Draghi and Haruhiko Kuroda’s names are missing from the list of attendees for this year’s event. In fat, none of the ECB’s executive board members are making the trip to the Kansas City Fed’s annual central banker retreat in Wyoming’s remote Grand Teton National Park.

Policy makers gather against a backdrop of strong US growth though the global economic outlook is less rosy.

President Donald Trump’s trade war threatens China, while Turkey and other vulnerable emerging markets have been buffeted by financial market turmoil. Mr Trump has also turned his ire on the Fed chief, who he picked, for raising interest rates.

Mr Powell’s debut address to the Wyoming gathering of central bankers will do little to shake financial markets if history is any guide.

That’s according to analysts at Cornerstone Macro LLC, who reviewed the reaction of investors to past gatherings in Jackson Hole.

“The reality is that from a market perspective, recent Jackson Hole symposia have been fairly boring,” analysts at Cornerstone led by Roberto Perli, a former Fed economist, said in a report published on Wednesday.

Neither the Standard and Poor’s 500 Index nor the ten-year Treasury yield moved much in the aftermath of speeches by Fed Chairs Ben Bernanke and Janet Yellen, they found. The exception was 2011, when Mr Bernanke fleshed out plans to reinvest maturing bonds into longer-dated debt in a plan known as Operation Twist.

The Cornerstone analysis concluded the limited fallout related to Bernanke and Yellen preferring to use the central bank’s policy meetings rather than the Grand Teton National Park as the place to communicate major decisions. Yellen skipped 2015’s symposium, which is organized by the Kansas City Fed.

Looking at this week, Cornerstone said Mr Powell hasn’t shown any tendency to deviate from the collegial approach to setting policy and that there doesn’t seem to be a need for him to adjust market expectations.

“The symposium will very likely generate interesting ideas and spur a lively debate among academics and policy makers, but as a base case shouldn’t result in any deviation from the policy trajectory the market already priced in,” Perli and colleagues said.

Minutes of the Fed’s July 31st-August 1st meeting, which were published on Wednesday, left little doubt that Powell plans to raise the US benchmark lending rate next month.

At Morgan Stanley, Hans Redeker, global head of foreign exchange strategy, is advising clients to still pay close attention. In a report to clients released on Thursday, he estimated that the SandP 500 rallied nine out of twelve times for an average gain of 0.6 percent from the past 12 meetings and that 10-year Treasuries rose more than two-year notes on nine occasions.

“Investors should be attentive to Jackson Hole,” said Mr Redeker. “Investors will be looking for signals to gauge whether Powell will use this as an opportunity to convey potential policy.”