Houses - and a pint - were cheaper and wages were on the rise; but double digit interest rates and pricey food mitigated the benefits 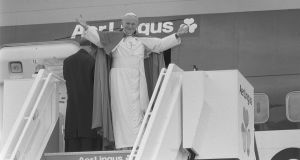 His Holiness Pope John Paul II may have arrived on an Aer Lingus plane, but flying abroad was very expensive for Irish people back in 1979. Photograph: Dermot O’Shea

The 1970s were a turbulent time for the Irish economy. Two oil crises increased the cost of energy as well as the prices of imported goods and services, sending inflation soaring.

Workers took to the streets to strike for better wages – which they got – with earnings rising by double digits a year throughout the 1970s. House prices were half of what they are now – even adjusted for inflation – and a pint was much cheaper.

However, in the days before Lidl and Aldi food was expensive, and buying a new television to watch the Pope’s visit could have set you back several months wages, while a foreign holiday was only for the very rich.

So were we actually better off then , or now?

Well, by 1979 Ireland had spent six years as a member of the European Economic Community (EEC); a period which saw Ireland play catch-up with its European peers.

In addition, soaring inflation saw workers strike for better pay, something which led to upward pressure on wages.

According to the CSO, nominal average earnings rose by a staggering 18 per cent a year in the 1970s – the largest increase in the purchasing power of average weekly earnings over the period 1938 to 2015.

Despite such strong levels of inflation during the 1970s, people’s quality of life actually increased on the back of the aforementioned earnings growth. As the CSO points out, average earnings actually increased at a faster pace than the cost of goods and services in the 1970s, with real earnings increasing by an average of 4.8 per cent a year.

So, while life had gotten more expensive, people were in a better position to pay for it.

Food however, was significantly more expensive than it is today.

A pint of milk cost 11.5p in August 1979, or €0.61 adjusted for currency/inflation (and if you want to see inflation in action this pint of milk jumped by 8.7 per cent between August and November of that year). While pints of milk are no longer sold, the best equivalent is 500ml, which now costs less, at €0.52 for a carton in Tesco.

Electronic goods were also far more expensive. In the pages of this newspaper back in January 1979, a reader has advertised an “unwanted gift” of a 14 inch colour portable television. The price? A staggering £320, which comes to an even more unbelievable €1,829.97 when adjusted for inflation. As a comparison, you can get a 22 inch flat screen TV for just €129 at Argos.

Foreign travel was a difficult prospect too. In 1976 Aer Lingus advertised a flight from Dublin to London for £56 return – or € 377.85 when adjusted for inflation.

Price of a pint

It’s the perennial question; was it cheaper to buy a house decades ago than it is now?

But what about when considered against a multiple of income? Well, if we consider the average industrial wage in 1979, of £5,375 a year, it means that someone would need a multiple of just five times their income to secure a home across the state, or 5.9 times in Dublin or 4.9 times in Limerick.

Contrast that with today, and the outcome is interesting. Nationally, there isn’t much of a differential between now and then; you need a multiple of six times your income today to buy across the country, compared with five times then. However, it’s actually “cheaper” to buy a house in Limerick today, due to the jump in the average wage, but it’s considerably more expensive to buy a house in Dublin. Now you’d need nine times the average income to buy in Dublin compared with six times back in 1979.

And just to make things even more confusing, we should consider the impact of interest rates. Someone buying a property today can expect to lock into a fixed rate of 3 per cent or less. Back in 1979, putative homeowners faced interest rates of about 14 per cent, which made buying a home a lot more expensive than sale prices would indicate.

So the conclusion? In real terms, house prices might look a lot cheaper back in 1979, but affordability may not have been that more favourable.