Business Week: Also in the news was Brexit; the economy; tax reforms; and Eason deal 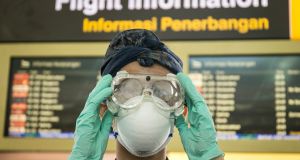 Airlines and tourism-related stocks were amongst the hardest hit with countries curbing travel. Photograph: Getty Images

Hopes that the coronavirus could be contained to China vanished over the past week as infections spread around the world, countries started stockpiling medical equipment, and stock markets plummeted as fears grew of a global recession.

“We have a crisis before us. An epidemic is on its way,” French president Emmanuel Macron said as ratings agency Moody’s said a coronavirus pandemic would trigger global and US recessions in the first half of the year.

The crisis sparked a sell-off that wiped €6.7 billion off the value of all shares listed on the Irish Stock Exchange between the opening of trade on Monday morning and close of business on Wednesday night. Further woes followed on Thursday and Friday.

In London, the leading FTSE 100 index had haemorrhaged £152 billion (€178 billion) between Monday and Thursday, while dealers in Dublin said virtually every stock retreated. “There’s a lot of red on the screen,” said one shortly after business closed.

Airlines and tourism-related stocks were among the hardest hit with countries curbing travel and cancelling major events in an effort to halt the virus’s spread.

Eoghan O’Mara-Walsh, chief executive of the Irish Tourism Industry Confederation, said a decision to restrict or cancel events related to the St Patrick’s Day festival next month would be “premature” at this stage, but it is no doubt under significant threat.

The virus has led to the postponement of Ireland’s Six Nations Rugby clash with Italy, and could yet claim more sporting fixtures, Peter Jackson, chief executive of Paddy Power owner Flutter Entertainment, said.

Jackson noted that next month’s Cheltenham racing festival, a key event for the industry where punters will wager more €500 million, looked likely to go ahead. There are also concerns about this summer’s European Football Championships, which is due to be staged by a number of cities across the continent, including Dublin.

“All bets are off” when it comes to the impact of coronavirus on the airline industry, according to Dómhnal Slattery, chief executive of Dublin-based Avolon, which is one of the world’s largest aircraft leasing companies.

“One would have to seriously question whether Ireland is prepared for an epidemic situation,” he said. “All bets are off. This is not a Chinese issue anymore.”

Elsewhere, drinks group Diageo (the maker of Guinness) said the spread of coronavirus in greater China and the Asia Pacific region could knock up to €240 million off its 2020 profit as bars and restaurants stay shut, while the owner of Penneys warned about supply shortages. Such is the uncertainty, Aer Lingus owner IAG said it can’t give profit guidance for this year.

The UK once again resorted to threats of self-harm as a negotiating tactic this week, ahead of talks with the European Union on a post-Brexit trade deal.

As if the self-imposed deadline of December 31st – accepted by almost everyone as impossible to meet – wasn’t crazy enough, its negotiating mandate for talks, published this week, threatens to walk away if there is insufficient progress by the end of June.

It gets worse, too. The mandate also laid out its vision of a bare-bones free trade agreement with no alignment of standards or regulations, something the EU has categorically ruled out and could never countenance.

In the true spirit of collegiality ahead of the talks, the UK rejecting the EU’s demand for a level playing field based on current shared rules on state aid, competition policy, taxation, employment and environmental rights.

It also rejected the EU’s call for an overarching agreement to cover trade, security, foreign policy and other issues. Instead, it proposed separate agreements, with the EU’s trade deal with Canada as the starting point for a future economic relationship.

Despite the Brexit time bomb beginning to tick once again, the Bank of Ireland “economic pulse” this week showed that the UK’s orderly withdrawal on January 31st led to a bounce in consumer and business confidence in the Irish economy.

Elsewhere, the European Commission praised Ireland’s progress since the financial crash, pointing out that we have made “remarkable progress” in strengthening our financial sector and improving employability since 2014.

It said Ireland was experiencing “a very high rate” of economic growth for an advanced economy – 8.2 per cent in 2018 – boosted by the activities of multinationals. However, global uncertainty meant growth of 5.6 per cent last year and above 3 per cent this year.

In the same report, though, the commission criticised Ireland for making “limited progress” in dealing with aggressive tax practices by multinationals or in broadening its tax base.

As we know, reforms to international tax practices are coming down the tracks courtesy of the Organisation for Economic Co-operation and Development. The business lobby group Ibec warned this week that the Government may be underestimating the potential loss this might mean for the Irish exchequer. The Government previously put the loss at about €2 billion.

Reforms to our tax system have already drawn the ire of one multinational as pharmaceutical giant AbbVie complained to the Department of Finance about an “unfair” €572 million tax bill arising from changes in October’s budget.

Irish insurer FBD denied it was ripping off customers as its latest accounts showed a spike in profits, which rose to €112.5 million in 2018 from €50.1 million a year earlier.

Part of the increase was down to the fact that the company released €40.1 million of unused money that had been set aside for expected insurance claims costs in previous years. FBD now plans to double its shareholder dividend to €1 per share.

In other corporate news, Bank of Ireland is planning deeper cost cuts and to shift hundreds of millions of euro of distressed mortgages off its books, after warning it will not be able to meet key profitability targets.

The bank’s underlying pre-tax profit fell by 19 per cent last year to €758 million as it set aside provisions for bad loans, and its net interest margin – the difference between the rates at which it funds itself and lends on to customers – dipped.

Finally, Irish-owned bookseller Eason acquired rival Dubray Books. No price was disclosed, but corporate finance sources said it probably traded at five or six times its operating profit, which would put the deal within the range of €3.5 million to €4.2 million.