Paddy McKillen once labelled Frederick and David Barclay as ‘highly aggressive. And philistines’ 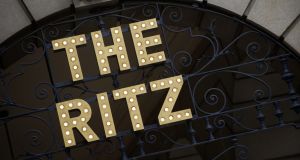 Central to the Barclay family empire is The Ritz in London, where bugging is alleged to have taken place. Photograph: iStock

Under a birch tree in Mortlake cemetery in west London stands a recently installed headstone of Frederick Hugh Barclay, a travelling salesman who died in 1947, still suffering respiratory problems from breathing gas during the first world war.

His twin sons Frederick and David went on to become two of Britain’s most prominent tycoons, together buying The Ritz hotel and the Daily Telegraph newspaper, where the UK prime minister Boris Johnson made his name as a political reporter.

Yet the new memorial was not a joint endeavour. Inscribed with the words “In loving memory of our father”, the black granite stone then lists the names only of David Barclay and his brother Andrew.

There is no mention of Frederick Barclay’s six other children, including Sir Frederick. Some family members never agreed to the new stone and feel “deeply hurt”, according to friends.

Such painful rifts were once a private affair for the billionaire Barclay brothers. But the bitter quarrel this week burst dramatically into public, after London’s High Court heard claims that Sir Frederick and his daughter Amanda had been secretly recorded for several months after his nephew bugged the conservatory of The Ritz hotel.

Intra-family espionage, high court intrigue and alleged corporate chicanery are now tearing apart one of Britain’s wealthiest and most influential family enterprises, as well as the deep bond of the twins who founded it. One longtime associate described the events as a story “fit for Shakespeare”.

“All families have bust-ups. They fall out. But bugging? There must be no way back from that,” he said.

At stake is the future of a vast estate stretching from a mock-gothic castle on the private island of Brecqhou in the English Channel Islands to the Telegraph Media Group, The Ritz, retailer Very Group and delivery company Yodel.

It is a critical time for the Barclay brothers as pressures build on their businesses. Many are struggling and soaking up fresh capital, while some of the most valuable parts of the empire are for sale.

Sir Frederick and Amanda have told friends they fear being cut out of proceeds from the sale of The Ritz, one of London’s most coveted properties. A further complication is Sir Frederick’s divorce from his wife, Hiroko Asada.

Behind the scenes, the Barclays have been battling for years over the group’s complex web of assets, which converge in a family trust. Some relatives are not on speaking terms, according to several of their associates.

Allegations of hardball tactics have been thrown at the Barclays before. Irish property developer Paddy McKillen, accused them of “dishonourable” behaviour in a years-long legal dispute over some of London’s most prestigious hotels. “Traders. Out to turn a quick buck,” he told the Guardian in 2014. “Highly aggressive. And philistines.”

But the bugging litigation – which alleges breach of confidence and misuse of private information – is a challenge of a different order. It could, through the coming months, escalate to see the Barclay offspring called to the stand in an agonising, very public, family reckoning.

The breaking point for Sir Frederick came on January 13th when he heard that his nephew Alistair, Sir David’s fourth and youngest son, had placed a covert listening device in the conservatory of the Ritz hotel, according to court documents. It was the spot where Sir Frederick enjoyed a cigar and private time with his only daughter.

On February 5th his lawyers served Alistair, a racing car driver turned struggling property services entrepreneur, with a court order at his doorstep. It gave him a week to hand over the fruits of what a court heard described as an “elaborate covert recording system”. This included three months of voice files, transcripts and the WhatsApp group Alistair used to discuss them.

Alistair was restricted from tipping off the family members who would, a week later, become his co-defendants: Aidan and Howard, Sir David’s eldest children and the operational heads of the Barclay businesses; Andrew Barclay, Aidan’s son; and Philip Peters, a trusted aide.

Sir Frederick and Amanda’s principal worry is that this could be used against them as business assets are sold off, friends said. The family is seeking £750 million (€876 million) or more for The Ritz, with potential bidders including Sidra Capital, a private investment group that represents wealthy Saudi Arabian families.

Although they helped develop the tangled Barclay estate, which spans dozens of companies and tax havens on two continents, the structure now leaves Sir Frederick’s side vulnerable.

The Barclay brothers are no longer beneficiaries of the family trust, according to people briefed on the matter. But the arrangements they agreed left Amanda with a 25 per cent share, unable to block Sir David’s children on any big decisions.

Amanda is also not a director on B.UK, the Bermuda-based holding company that oversees the main Barclay businesses. Records obtained by the Financial Times show its directors to be Aidan, Howard and Mr Peters, all co-defendants in the bugging case.

Recent corporate changes have fuelled their fears of being sidelined. In January, barely a week after the bugging was discovered, Amanda and her associate, Fardokht Aghevli, were dismissed against their will as directors of six Ritz-related companies. Their successors: Aidan and Howard and Mr Peters.

All Barclay family members contacted by the Financial Times declined to comment.

Even before the lawsuit, the family dispute was having a tangible effect on how the Barclay assets were managed, and possibly sold. Interested buyers have faced some conflicting messages from different sides of the Barclay clan.

One person close to the potential Ritz sale said there seemed to be multiple parallel processes under way, being handled by different brokers and members of the family. Another executive who expressed interest in the Telegraph was told by some family members the titles were for sale, while others said the opposite. “Who bloody knows?” the executive said.

Old colleagues of the Barclays say Aidan, 64, and Howard, 60, most want to keep the Brexit-backing Telegraph titles – which are a formidable vehicle for political influence – and sell The Ritz to subsidise weaker businesses, such as Yodel.

By contrast the younger Barclays see the Telegraph as a “vanity asset”, rapidly declining in value since it was bought for £665 million in 2004. “They want to move it now,” said the former Barclay executive.

However the estate is eventually carved up, it looks unlikely that relations between the once-inseparable Barclay twins will recover. Sir Frederick has not visited the 60-room castle on Brecqhou for years.

Sir David, like his brother, still enjoys a regular cigar at a hotel near to his Channel Islands home, often bringing along his bulldog, Bertie. But unlike the Ritz room that was bugged, Sir David’s preferred spot at the Moores hotel on Guernsey is outside, in the open air. – Copyright The Financial Times Limited 2020