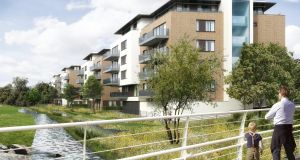 A Marlet image on its website for the proposed development of 115 units on Brennanstown Road in Cabinteely, Dublin 18.

Marlet Property Group has applied for planning permission to build 115 residential properties on one of Dublin’s more exclusive roads.

Marlet has sought permission under a fast-track planning scheme designed in response to the Republic’s housing shortage. Under this, builders apply to An Bord Pleanála directly for permission after consulting the local council. The board then has 16 weeks to decide, and it can approve the plans, modify them or refuse them.

There are applications with An Bord Pleanála for 1,447 apartments, 1,782 houses and 787 student bed spaces. The majority of these proposed developments are in Dublin.

The site in question, about 100m from Cabinteely Park, was owned by Doyle’s Nursery and Garden Centre. A part of the nursery was sold about five years ago to New Generation Homes which was headed by Greg Kavanagh and Marlet chief executive Pat Crean. Following Mr Kavanagh’s departure from New Generation, the company’s assets ultimately came under the control of Marlet through its UK backer.

The historical sale of the site on the garden centre’s plot does not affect the current operation of the business.

Access to the site, which will have on-street parking and a basement car park for 190 spaces, is proposed at the location of the existing entrance to the new Doyle’s Nursery and Garden Centre facility. Additionally, the site will have spaces for 164 bicycles.

Included in Marlet’s portfolio is Charlemont Exchange, an office building at Grand Canal, a 180-unit apartment development in Harold’s Cross and accommodation for 193 students in Stoneybatter.

Submissions pertaining to the Brennanstown Road scheme can be made up to April 3rd and An Bord Pleanála will decide on the case by June 19th.

1 Over 400 complaints from migrant workers at meat plants lodged with WRC
2 Coronavirus: We must save lives but we also need to live
3 Avoca warns of redundancies due to coronavirus
4 Companies without tax clearance shut out of Covid wage subsidy
5 Staff at Dublin and Cork airports to vote on work practice changes
6 Grounded Aer Lingus pilots develop fix for turnaround glitches
7 Facebook agrees Irish wind-farm deal with Brookfield in Tipperary
8 Moving in and out of lockdown is a recipe for economic disaster
9 Virgin Media vows to withhold sports channels until Eir ‘pays its bill’
10 Brown Thomas job cuts; sandwiches and Covid; and Ulster Bank’s blues
Real news has value SUBSCRIBE