Infrastructure projects and housebuilding in US critical for company, chief executive says 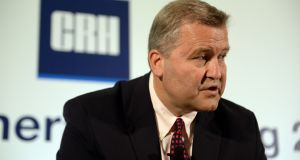 Home- and road-building in the United States will help fuel growth at Ireland’s biggest company, CRH, in the coming year.

While the Dublin-based group has businesses spanning the Americas, Europe and parts of Asia, its chief executive, Albert Manifold, made it clear on Thursday that the US will play a key role for CRH over the next 12 to 18 months.

Its Americas businesses, mainly made up of operations in the US, contributed €12 billion of its €27.6 billion revenues and €1.29 billion operating profit last year. CRH’s €3 billion purchase of cement maker Ash Grove should boost those figures in 2018.

The group will close its purchase of the Kansas-based manufacturer this month. When CRH announced plans for the deal in September, analysts highlighted the fact that it would position the group to continue to reap the benefits of some key trends in the US.

CRH also sees some recovery in other markets, such as the midwest, while in the northeast, homeowners are focusing more on repair and refurbishment.

As a supplier of materials such as asphalt, cement and concrete, CRH is also poised to benefit from continuing infrastructure spending across the US.

Since the 2016 Fixing America’s Surface Transportation (Fast) Act, the federal government has been spending $40 billion a year on infrastructure. Individual states throughout the US are matching and exceeding this, bringing the total closer to $90 billion.

Manifold made it clear that the group sees this spending, rather than further outlays now being discussed by the US congress and President Donald Trump, as one of its engines of growth.

He did not dismiss the talks about future US infrastructure spending, in fact he remarked that CRH “likes what it is hearing from Capitol Hill” but pointed out that Fast Act-supported spending is already under way and can be counted on.

While the US remains the group’s single biggest market, the UK accounted for 10 per cent of the €27.6 billion revenues that CRH earned last year. Manifold noted that this means the UK is the Irish company’s second-biggest individual market.

He predicted that CRH would benefit from UK infrastructure projects such as High Speed 2, a proposed new railway tying London to Birmingham and the England’s east midlands, and the Thames Tideway, an upgrade to the British capital’s sewerage system, would aid growth in the UK.