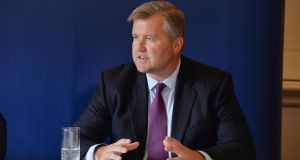 Mr Manifold (55) took home €2.15 million in fixed pay, while his performance-related pay fell to €6.51 million from €7.89 million in 2016, according to CRH’s annual report, filed on Friday with US market regulators.

The head of Ireland’s largest publicly-quoted company enjoyed a record €10 million remuneration package in 2016, after its share price soared 80 per cent over the space of three years on the back of a transformational acquisition and hopes around then newly-elected US president Donald Trump’s infrastructure spending plans.

However, the share price declined by 9.1 per cent last year, as investors took a more circumspect view of US construction expenditure. Three-quarters of awards under the company’s performance share plan are based on total shareholder returns over a three-year period, comprising share price movements and dividends.

CRH revealed on March 1st that its earnings before interest, tax, depreciation (ebitda) rose 6 per cent last year to €3.3 billion to outstrip a 2 per cent increase in sales, to €27.6 billion, as margins grew in all of its divisions. The group, which has a €23.2 billion market value, has spent €13 billion on acquisitions in the past five years and earned €5 million from selling unwanted assets over the same period.

The company has said it expects to have almost €700 million to spend on further actions after its €3 billion purchase of US cement maker Ash Grove goes through at the end of March. Mr Manifold made almost €2 million last March from the sale of 60,000 shares in the company.

The annual report also disclosed that CRH finance director Senan Murphy will see his base salary increase by 9.8 per cent this year to €775,000. His maximum annual performance share plan award will rise to 225 per cent of salary from 200 per cent previously.

“Senan was appointed as finance director in January 2016 on a significantly below-market salary, with the expectation that his salary would increase over time,” said Donald McGovern, chairman of CRH’s remuneration committee, in the annual report. “Since his appointment, Senan has performed exceptionally well and grown significantly in his role.”